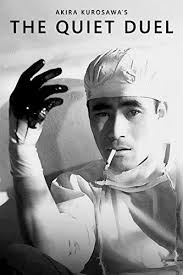 For this month’s next review for Genre Grandeur – Medical Dramas here’s a review of The Quiet Duel (1949) – by James of Blogging By Cinemalight.

Thanks again to Patty of CaftanWoman.com for choosing this month’s genre.

The Quiet Duel (aka 静かなる決闘, Shizukanaru Kettō) (Akira Kurosawa, 1949) Watching The Quiet Duel (only released in the U.S. in 1979, made outside Toho Studios, and his only collaboration with Gojira! composer Akira Ifukube), was an interesting lesson in Kurosawa and his direction. The film’s not available in usual circles (probably due to its production outside of Toho Studios), but after several attempts to find a copy, I relied on YouTube (never the best source for anything) for viewing. I was a bit distressed to see that there was no translation burned into the print used, but went on viewing, figuring that I’d get a sense of the visual and figure out the story later.

I found that I didn’t need translation. Kurosawa was telling the story visually and I got a sense of character, relation, action and drama without being told what I was watching. I may not have the words precisely as intended, but the story and emotion were conveyed.

And that, ladies and gentlemen, is what cinema should be.

It was almost disappointing to hit the “cc” button and get the translation. It just told me what I already knew. And Kurosawa was telling the story so efficiently, I was surprised about how much information was being conveyed in so short a time.

The Quiet Duel is a particularly timely story—in these pandemic times—of how personal responsibility can affect the lives of others, and the acknowledgment that such personal responsibility is painful, but necessary. That it involves a medical professional affected by a patient is especially poignant now, but the story serves as a universal parable of personal duty versus the anarchy of selfishness.

Or is it the selfishness of anarchy? I tend to get those confused.

During the second World War, Army surgeon Dr. Kyoji Fujisaki (Toshirô Mifune) is working a particularly tough night in the OR. Despite the heat, it’s raining buckets, enough that the tent roof is leaking into the surgical area. And the make-shift unit is more chaotic than usual: the lights are going out and the wounded keep coming in an endless stream. One of them is Susuma Nakada (Kenjirô Uemura), just another blasted body that needs to be repaired and on the razor’s edge of life and death. Time is of the essence. So, the careful Dr. Kyoji can be forgiven when, in trying to tie off a suture, he takes off one of his surgical gloves to complete the task in order to move on to the next. But, when he reaches for his scalpel, he cuts his finger, bloodied from the soldiers wounds. Iodine is applied, but the damage is done. His blood is mixed with the soldier’s. The two are inevitably tied. Blood brothers.

The operation is a success, on the surface. The soldier survives and will go on to a long life. But, the doctor overhears that Nakada has syphilis and sternly tells him (“Get treatment when you get back home. Don’t spread your disease. If you do, you’ll ruin people’s lives.”) that he should have it treated, not only for his own health, but the health of others. Nakada scoffs—he’s fine, and he’s not going to worry about it. But, the doctor has a blood-test done on himself. When the results are brought to him with silence, he already knows the result—he has contracted the disease. He is not fine. He will have to live with the ramifications for the rest of his life.

It is 1946, post-war. Dr. Kyoji returns to civilian life, working in the clinic— “Surgery, Obstetrician and Gynecologist”—of his father Dr. Konsoke Fujisaki (Takashi Shimura), and things have changed a bit. Kyoji is a diligent surgeon, but stoic and a bit of a ram-rod. His father chalks it up to his war experience, but he cannot explain why Kyoji has broken off his six year engagement to Misao Matsumoto (Miki Sanjô). She continues to come by the clinic to cook and to help, but also in a vain attempt to try to learn why the love of her life has decided to postpone their marriage, let alone cancel it completely. She can’t get any answers from Kyoji, who is cold and advises that she move on. Neither can his father explain it, who keeps the pictures of the two when they were happy. He loves his son, but it’s like he’s a stranger now.

Kyoji is not mentioning his syphilis. There’s a stigma attached to having a venereal disease, but as long as no blood is exchanged between himself and his patients, he can continue doing his job. But, his reasons for cutting Misao loose are obvious—he loves her still, but does not want to give her the disease and any children they may conceive will suffer horrendous medical consequences. So, he remains silent, but secretly uses the clinic’s supply of salvarsan to give himself a weekly injection, so that, maybe, after years of treatment, he might be cured.

But, the depleting supplies of salvarsan have not gone unnoticed. The clinic’s new apprentice nurse Rui Minegishi (Noriko Sengoku)—single, pregnant, and working at the clinic somewhat under protest at the suggestion of a local police corporal—is of a cynical disposition and catches the doctor taking the injection—so, it’s not vitamins—and it only shows her how duplicitous even a high-and-mighty doctor like Kyoji can be. After all, didn’t he dump his fiance with no explanation (as had been done to her)?

When nurse Rui discovers Kyoji’s injecting salvarsan, the two form a cautious bond of the disgraced. But, with her knowing the truth, he won’t be able to keep the secret contained; he tells his father, who, at last, understands the heavy burden he’s been carrying and, now knowing the truth, takes the sad step of telling the Matsumoto family that their daughter has been released from the agreed engagement. Nurse Rui overhears the two doctors come to their understanding and comes away with more respect for Kyoji and an understanding of his burden. She begins to take her nursing duties more seriously, given Kyoji’s example.

To the viewer, Kyoji’s self-sacrificing altruism would appear to be a little hollow without some display of consequence beyond his own imposed martyrdom. One of the clinic’s patients happens to be the wife of Nakada, the soldier Kyoji saved during that fateful operation. Kyoji seeks out the man to implore him to begin treatment for his syphilis and warns him of the ramifications on his child, but Nakada merely dismisses him, tells Kyoji he has no signs of syphilis, and warns him not to interfere with his family. Kyoji can only watch as the wife is not informed and Nature must take its course.

The Quiet Duel was not released in the U.S. until 1979, maybe because of its origins from a different studio with a different distribution deal—Toho’s films made their way to Janus—but maybe due to its subject matter, which might have slowed its showing. It could have been worse—Kurosawa’s original plan was to end the film with Mifune’s doctor going mad from the disease, but that script could not get past the censors of American Occupied Forces, who balked that the idea would discourage anyone with the disease to get treatment. It shows a bleaker view of life, and of doing the right thing, something that will show up later in Kurosawa’s film. One interesting line from Kyoji’s father has an interesting depth: “If he’d been happier, he might have been a snob.”

The Quiet Duel is not regarded as a great Kurosawa film—it’s set-bound, melodramatic, and rather sedate…and is not one of his later films! Those reactions are from folks who know that his best films are ahead, certainly the ones he’s most known for. But, just my incident with the sub-titles tells me a lot.  All I need to know, really. Whatever language—or lack of it—that separates the communication of ideas and emotions and content from viewers, is something that Kurosawa has mastered by how he makes a film and the choices he makes. His film could be silent and everything still comes across. Communication is key in film-making with its special blend of telling stories through pictures. No matter the language, no matter the details, Kurosawa still manages to connect with audiences willing to watch and feel. That is what makes a master film-maker.