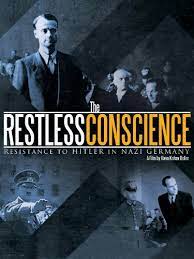 “At least 170 German citizens were brought to trial and convicted in 1944 as participants in the last plot to assassinate Adolph Hitler. It was not an isolated act, but only the last of more than 20 attempts and acts to overthrow the Nazi Leadership.” – Narrator

Brief Synopsis – Documentary about the many people within the hierarchy of the German system during World War II who resisted and paid very high prices for speaking up.

My Take on it – This is a movie that I came across by accident on the internet.

They do a great job showing that there were many groups trying to find a way to stop the Nazi killing machine within the regime itself.

Unfortunately, most of these groups acted alone and were easily stopped each and every time.

The film does give lots of hope that even when things might look very desperate, there are still many people who will look to their own conscience first and do all they can to resist the tyranny that is rising.

It’s too bad that the number of people supporting the movement itself heavily outnumbered those who wished to oppose it from inside by millions.

This film tells the stories of many of these brave men and women who risked everything in order to save other people from the destruction of those in power.

It’s great how this film accentuates aspects of World War II resistance that most people (myself included) never would actually expect.

MovieRob’s Favorite Trivia – The film lists over 25 high ranking German officials murders or executed by the Nazi Government due to their resistance to the war and leadership of Adolph Hitler. (From IMDB)