For this month’s next review for Genre Grandeur – Die Hard Doppelganger Movies, here’s a review of The Raid (2011) by David of BluePrint: Review

If, like me, you’re a fan of martial arts and action movies you’re probably aware of the endless praise being aimed at The Raid. You’re probably pretty bored of hearing about it to be honest and you’ve probably already seen the film by now, but please indulge me. I guess I’d like to address how the film lived up to all the hype. With so many film reviewers out there these days, it’s easy for hype to spread like wildfire throughout the blogging and film journalism communities, which more often than not makes it very difficult for a film to live up to expectations.

I was incredibly psyched to see The Raid. I love martial arts movies and it’s been a while since I’ve seen a really excellent new entry to the genre, so once I started hearing the buzz the film was picking up and saw some of its stunning trailers I bumped it to the top of my ‘must see’ list of the year. Most people were desperate to see The Dark Knight Rises and The Avengers, for me it was all about The Raid. So when you build a film up in your head so much, can it possibly deliver?

Before I answer that, let me fill in those unaware on what The Raid is all about. A SWAT team is sent to an apartment block in Jakarta filled with the city’s criminals to extract the area’s most notorious crime-lord, Tama. As the team work their way up the building’s 30 floors (Tama of course is at the top) they get discovered and an alarm is triggered. The building is then locked down and Tama calls for all the villainous inhabitants to rid it of this new ‘infestation’. Most of the team get wiped out fairly quickly and they become aware that help is not on its way as the mission is not quite legitimate, but a few battle on, including rookie Rama (Iko Uwais), who has a personal connection with the mission which is unveiled as things go on. 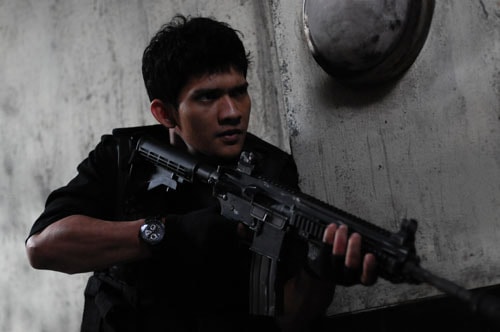 To answer my previous question – The Raid delivered exactly what I wanted. The film remains as intense as its trailers, with the frenetic pace never faltering. Calling it action-packed doesn’t even do it justice. Barely 5 minutes go by without some sort of fight or act of violence taking place and the pumping soundtrack by Linkin Park’s Mike Shinoda and Joseph Trapanese helps things thunder along. There are a few short lulls included to prevent overload, but these are just as long as necessary to drive forward the plot or to add some effectively tense scenes. The ‘machete in the wall’ sequence stands out in particular with regards to this and shows that director Gareth Evans is capable of creating excitement beyond just amping the pace.

For martial-arts junkies the choreography is probably the strongest element. The Indonesian martial art of Silat is the foundation of this (as with Evans’ previous film Merantau) which is heavy hitting and brutal, making use of elbows and knees a little like Muay Thai (which was key in Ong Bak). The stunt-crew do an incredible job, creating realistic looking and wince-inducing fight scenes. And Evans certainly knows how to shoot these. The camerawork and editing is fast and fluid, but never confusing as with most Hollywood action movies these days. Sequences look very stylish but never overly glossy or flashy. You’re sucked into the action and violence rather than watching the pretty pictures. 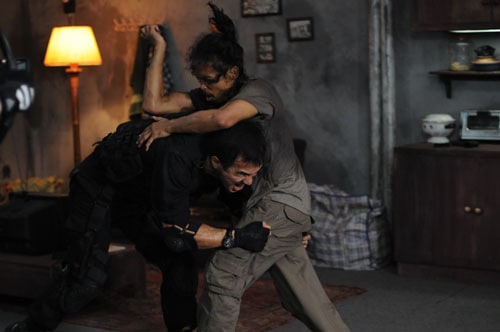 And the action and violence is what matters here. Plot is bare-minimum, but utilised enough to make you feel worried about the situation the characters are in and care for who wins or loses. The whole thing plays out like a video game, with characters working their way up the levels of the building and coming across ‘bosses’ they must defeat. This may sound like a criticism, in fact I’ve probably used it against some films in the past, but Evans understands what works about video games and why they’re fun and exciting and the ideas taken from them work perfectly, getting the audience excited about the journey through each ‘stage’ and keen on making it through to the end. Speaking of which, one of the minor criticisms I’d have with the film is that, although the final showdown between our protagonists and Tama’s right hand man is breathtakingly good – one of the best fight scenes I’ve ever seen, the actual final moments, when Tama’s strand is tied up and those left make their way out of the building, felt a little underwhelming.

As action films go, this is a true classic of the genre though and this gripe is absolutely minor. What precedes the final 5 or 10 minutes is so strong I don’t know what could live up to it. The Raid is easily the best action film of the year, probably the best of the decade. In fact I’ll go out and say it’s one of the greatest action movies of all time. Non-action fans need not apply though – this is a viciously bloody and violent film that doesn’t pretend to be anything other than an amazingly intense and exciting ride.