For the inaugural review for this month’s Genre Grandeur – Comic book / Superhero movies, I present you with a review by the woman who actually had the foresight to choose such a wonderful genre for us all to explore – Zoe from The Sporadic Chronicles of a Beginner Blogger.

If for some strange reason, you don’t already follow Zoe’s sight, I highly recommend that you do.  Her sight is filled with great insight on all kinds of movies, books, TV shows and all things X-Men 🙂  She also has a weekly top 10 list presented by guest blogger.  [I’m thinking of a new one for ya Zoe, be forewarned :)]

If you want to be a part of this month’s genre grandeur, it’s real simple, just write a review of your favorite comic book / superhero movie and send it to me at comic@movierob.net and I’ll post it.

Make sure to send it by the 25th of June.

Take it away Zoe……

So I was honoured when Rob chose me to pick out the genre for this month. It was really cool because I have been waiting for this genre to come up for a while: favourite comic book movie. Now the thing is, my all-time favourite is The Dark Knight, but I wanted to do something a little bit different, pick another movie. All that served to do was put me in deadlock, which didn’t help much either seeing as I am in the middle of exams, and now I had this to think about. I think I might do another review for this genre, just because. But thinking on it today I want to give The Punisher some love. It is a movie I think is highly unappreciated but very good, especially for what it is, and considering when it was made, I think it has held up really well over the years. 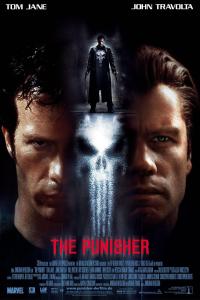 Special agent Frank Castle had it all: A loving family, a great life, and an adventurous job. But when his life is taken away from him by a ruthless criminal and his associates, Frank has become reborn. Now serving as judge, jury, and executioner, he’s a new kind of vigilante out to wage a one man war against those who have done him wrong. – IMDB

“Howard Saint! You took everything from me!” – Frank Castle

We can start with the casting of Thomas Jane as Frank Castle. I know that there have been a fair few that have griped about this, but I honestly don’t think that they could have topped this very easily. Jane brought a feeling of honesty to the work. He wasn’t overly smiley, nasty, sweet, funny, nothing. He was just Castle, the man whose family was butchered, the man who was left for dead, the man who survived and has dedicated his life to avenging his departed family. What I love about Castle is that he is the ultimate vigilante. There is nothing about being the best, having the morals, working for the greater good. No, Castle is the man that wants to punish, that wants to exact justice where the system failed him, and he doesn’t care how he achieves this end. This makes him ruthless; this makes him scary, he is unpredictable, smart, and really has nothing to lose. This is where I think Jane contributed well to the character, he played the part just so, never over the top, never lacking, always keeping the reminder at the surface that this is the man with a mission. 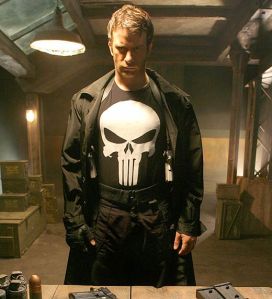 “I leave this as a declaration of intent, so no one will be confused. One: “Si vis pacem, para bellum.” – If you want peace, prepare for war.” – Frank Castle

John Travolta starred opposite Jane as Howard Saint, and I liked this. I don’t know why the world has issues with Travolta… they must be forgetting some of his finer moments (Pulp Fiction, Face/Off). He was perfectly suited to play the villain here, and I liked him. He was belligerent, he was the father, he was the man that set all that was about to happen to him in motion. Having Castle’s whole family killed was excessive, but how else will a crime lord react? He is introduced and comes across as slightly boring and bland, but he soon changes. The more that Castle picks away at him, threatens him, makes issues for him, spiting him, and just causing mischief and mayhem in general, Saint’s smooth façade rapidly starts to crumble. His composure drops, and his ego gets in the way, naturally dictating and changing the entire outcome of the event. The more emotional he gets, the more he lets Castle win, the more power he gives to his nemesis, the man who just will not die.

“It’s your duty… to make Castle dead! I don’t care what it takes, what it costs! Call the Russian.” – Howard Saint

The supporting cast is also interesting. Will Patton as Quentin Glass was also fantastic. As Saint’s right hand man, you get an inner look at how he does things. The relationship he has with Saint and his family is almost like he is a part of it, something that would later be the downfall, the thing that would lead to his loyalty being questioned. Laura Harring as Livia Saint was also well done. She was distant, the wife of a crime lord, and she knew it. She was a bitch, she was twisted, and was a big reason that things went the way they went. Women are so much colder than men sometimes. The action was entertaining, the schemes Castle embarked on to cripple the Saints were well thought out and implemented, and I thought the way everything came together was rather satisfying. The costumes were also pretty cool, and the relations between Castle and his neighbours was rather amusing. Spacker Dave was quite funny, and Ben Foster worked wonders with him. His friendship with Bumpo (John Pinette) was endearing, and Rebecca Romijn as the abused and broken Joan was also just what she needed to be. I am glad that a new romance was not crammed in and that humour did not come in and totally ruin the vibe of the movie that was being constructed. Everything was done just as it needed to be, in my opinion. 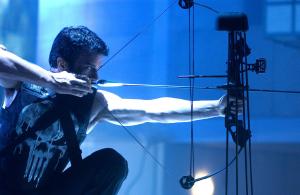 “Upset? Is that the word? I used to get upset. When I got a flat tire, when a plane was delayed. I used to get upset when the Yankees won the series. So if that’s what upset means, what am I feeling now? If you know the word, tell me because I don’t.” – Frank Castle

I really enjoy this movie, and truly don’t think it is deserving of the hate that it gets. It is pretty good, and considering how it was put together and the budget they had, it deserves far more credit. I have a really soft spot for this one, and find every viewing to be exciting and fun and intense. I enjoyed this the first time I watched this when I was a young teen, and nothing has changed for me. There was some humour in it, but it was really so rarely placed that it worked. I liked the look of the film; I loved the scheming, the suffering that was endured, and the deadpan nature of Castle, and the way that he will achieve his end, no matter what the cost. He was not just going to sit back and let Saint have his day; he was going to take the man down whatever the cost. The plot progressed at a decent pace, I didn’t feel that the movie lagged anywhere, and everything worked pretty well. However, this was followed up by such a grotesque sequel. What a pity, too.

Thanks again to Zoe for this excellent review to start off this months’ Genre Grandeur.

I look forward to many more reviews from you all!!!