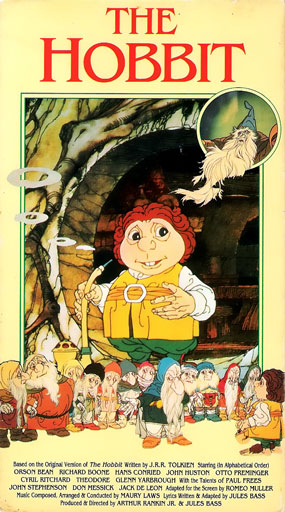 This month’s Genre was chosen by S.G of Rhyme and Reason and he chose Fantasy/Sci-fi animation (non Disney/PIXAR) Films as the Genre for May.  If you want to still submit a movie, the deadline is 25 May. Just send it to me at animation@movierob.net

My Take on it – As a kid, I recall seeing this movie and it helped expand my imagination into far off worlds and places.

A friend had the book version for kids and the pictures in the book were taken from this film.

Up until Peter Jackson started to remold the material for his second trilogy, this movie was the definite work on the story of Bilbo Baggin’s journey there and back again.

The story is told well here and it places more emphasis on it all from a child’s perspective, but that doesn’t diminish the impact of the story one bit.

The animation isn’t on par with what we have today, but for that time period, it works well.

The songs are funny to listen to, but they are catchy even if a bit annoying 🙂

The fact that it’s a great adventure story for kids is the reason I believe that it has always been accepted so well over the years.

I’ve said it before, Tolkien knew how to tell a great story, just had trouble writing it, because his descriptiveness always got in the way, but when seeing his works visually, it totally makes up for it.

Bottom Line – This was the definitive work until Jackson got his hands on the material.  Still works well, but feels too short.  The animation is shoddy compared to what we get to watch nowadays, but the storytelling is done extremely well and that more than makes up for it. Recommended!

MovieRob’s Favorite Trivia – The dwarves’ map and runes upon it are an exact copy of the version included in the book, although the phrase indicated as written in the moon runes is incorrect. When Elrond holds the map of Lonely Mountain up to the moon and reads; “Stand by the grey stone when the thrush knocks and the setting sun will shine upon the keyhole,” the runes shown actually read; “Five feet high the door, and three may walk abreast,” the part of the map that was already visible, hence Gandalf’s comment about the door being to small for Smaug to notice it. (From IMDB)

Genre Grandeur Worthy? – Unfortunately no. This movie is more than ok, but just doesn’t look and feel right 100%