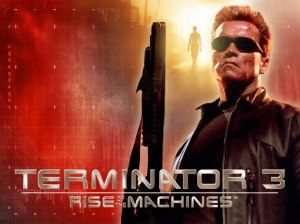 “Put down your weapon. And the coffin” – SWAT Team Leader

Brief Synopsis – A new advanced Terminator is sent to kill John Connor, this time when he is nineteen.  A new protector is also sent to keep him safe.

My Take on it – I’ve always been a bot fan of the first two movies in the series and was quite excited when this one originally came out.

It was nice to revisit this world and see Arnie in action, but on the other hand it just felt like they were going thru the motions most of the time.

Casting Nick Stahl as Connor was a big mistake because he doesn’t give off enough of a screen presence for us to care for him.

I’ve always been a fan of Clare Danes, so she was pretty good here and her character was much more sympathetic than any of the others (including the next Terminator X).

I liked how they were able to include the Internet as part of the plot being that it had not even been familiar to most people when the earlier movies were made.

When the new Terminator movie came out this summer, it was announced that this movie and the next one were no longer part of cannon, so we could disregard them.

…I gotta say, I’m not too upset about that

Bottom Line – Interesting plot, but it just doesn’t work as well as the original two movies. Stahl is very underwhelming as Connor and Danes as Brewster is a much better character to follow.  Feels like this storyline is just going thru the motions most of the time.  I’m quite happy this is no longer part of the Terminator canon.

MovieRob’s Favorite Trivia – Arnold Schwarzenegger’s fee for reprising his role was $29.25 million, a record at the time. His contract was 33 pages long and written by Hollywood super-lawyer Jake Bloom between June 2000 and December 2001. It was written into the contract as a “pay or play” fee, meaning he would get paid whether or not the movie was made. His “perk package” included a lump sum of $1.5 million for private jets, a fully equipped gym trailer, three-bedroom deluxe suites on location, round-the-clock limousines, and personal bodyguards. He also insisted on, and got, 20% of the gross receipts made by the venture from every market in the world-including movie theaters, videos, DVDs, television licensing, in-flight entertainment, game licensing, and so forth-once the movie had reached its cash break-even point. Such “contingent compensation” is not unusual in movie contracts, but, in most cases, Hollywood accounting famously uses smoke and mirrors to make sure to define “break-even” in such a way that a movie never reaches it. Schwarzenegger also could decide who worked with him. The contract “pre-approval” clause gave him choice of not only the director (Jonathan Mostow) and the principal cast, but also his hairdresser (Peter Toothbal), his makeup man (Jeff Dawn), his driver (Howard Valesco), his stand-in (Dieter Rauter), his stunt double (Billy Lucas), the unit publicist (Sheryl Merin), his personal physician (Dr. Graham Waring), and his cook (Steve Hunter). The negotiation of this contract did not come cheaply. The legal and accounting budget for the movie was $2 million. By the time all of Schwarzenegger’s demands were met, the budget of the film had risen to $187.3 million, making it the most expensive independently produced movie in history. (From IMDB)