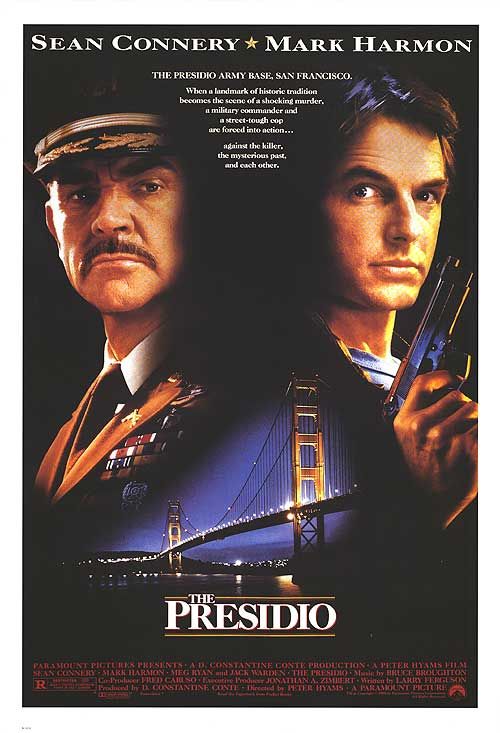 “I’ve known buildings that were easier to talk to than you. ” – Sgt. Major Ross Maclure

Brief Synopsis – After an Army MP is murdered, both the army and Local Detectives vie for jurisdiction on the case despite their animosity for one another.

My Take on it – This is another buddy cop movie from the 80’s with a slight twist; the cops aren’t really buddies.

Mark Harmon and Sean Connery are great together as two detectives (police and army) who have a history of animosity towards one another and this movie’s plot unfortunately harps on that fact a bit too much.

The story presented here is actually quite mediocre and there are dozens of police procedurals on TV nowadays that could probably present it in an even clearer and more succinct way.

I have always liked Meg Ryan, but in this movie, I think she was very underused and her character wasn’t developed well enough to feel like anything more than a token female role.

All in all, it’s an ok movie, but nothing really special.

Bottom Line – Harmon and Connery are great together.  I’ve always been a fan of Ryan, but her role here doesn’t feel developed well enough to not seem like a token female part.  The story itself is good, but any police procedural today could make it seem even better.

MovieRob’s Favorite Trivia – The film’s director Peter Hyams was also the movie’s cinematographer, the picture being a rare instance in a major motion picture of one person performing both these duties. Hyams though, has performed both roles on a number of movies. (From IMDB)