This post is part of the Olivia de Havilland Centenary Blogathon being run by Crystal over at The Good Old Days of Classic Hollywood. Thanks for letting me participate! 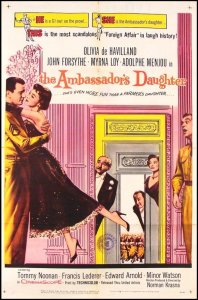 “You’ve never been to the ballet. How do you know you won’t like it? ” – Danny Sullivan

Brief Synopsis – On a whim, the daughter of the US Ambassador to France takes on a bet with a US Senator that there are still enlisted soldiers who are virtuous.

My Take on it – I can’t really claim to be the biggest fan of movies from ‘old Hollywood’ (prior to the 60’s), so I wasn’t sure what film to choose when Crystal invited me to partake in this blogathon.

I search thru Olivia’s resume on IMDb and saw a few that I’d seen and even a few id reviewed, but most of the list was completely foreign to me, so I decided to choose one at random that I was able to get a hold of a copy.

I’m quite glad that this is the film that I ended up choosing because it really was a fun one to watch since it mixes a romantic comedy with some serious social issues being dealt with at the time.

The bet between the Senator and General makes a lot of sense because the issue of whether soldiers stationed overseas can affect the local female population or not is still relevant even 60 years after this movie was made, hence it’s a timeless issue.

The two leads played by Olivia de Havilland herself and John Forsyth are great together because we can instantly see that the two of them have great chemistry working off one another making the romantic aspects feel even more plausible.

Al Noonan is great as the comic relief friend of Forsyth’s character and Myrna Loy shows here that she can still keep her own in a film even when delegated to a supporting role.

Watching this movie, has made me interested in seeing some more of this great actress’ movies and I presume that that is part of the reason that this blogathon was created.

Thanks to Crystal and Phyllis!

…And a Happy Centenial to the Ambassador’s Daughter herself, Olivia!

Bottom Line – Fun premise that works quite well. De Havilland and Forsyth have great chemistry together which makes it all seem more believable. Noonan is great in a comic relief role while Loy shows she still possesses the ability to do a great job even in a supporting role. Recommended!

MovieRob’s Favorite Trivia – The film market became segmented when studios realized that they could release and distribute differing versions of films for domestic and international audiences. In this film, in a scene set in a Parisian nightclub, Joan Fisk (Olivia de Havilland), daughter of the US Ambassador to France and American GI Sgt. Danny Sullivan (John Forsythe) watched a stage revue. In the European version, the dancers were topless. (From IMDB)