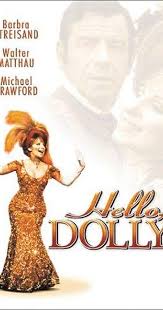 “Money, pardon the expression, is like manure. It’s not worth a thing unless it’s spread around, encouraging young things to grow” – Dolly

Brief Synopsis – A matchmaker in the early 1900’s decided to try and make a match for herself with a prominent wealthy single man while attempting to find matches for his employees at the same time.

My Take on it – I knew nothing about this film before watching it and I was somewhat surprised that it was the movie prominently featured in Wall-E (2008) (I totally forgot).

As musicals go, this one is quite fun to watch because so many aspects are done quite exceptionally.

Unfortunately, the story itself is a bit lacking, but that is to be expected from a film like this; they spent more time on the technical aspects than the story aspects obviously.

The choreography of the dance scenes are amazing and the ones in the restaurant really stand out for me as being done exceptionally well; it’s not hard to see the influence of Director Gene Kelly on those scenes in particular.

The cats itself is only OK and if someone were to suggest to me that Walther Matthau could be the co-lead of a musical along with Barbara Streisand, I probably would have laughed.

His casting is a bit strange, but ultimately still works here.

The songs are quite catchy and I find myself still being “plagued” by them with the inability to get them out of my head.

Bottom Line – Very fun musical that works as long as you don’t really care about the somewhat silly plot.  Amazing choreography works so well here and it’s easy to see director Kelly’s influence on many of those scenes. The cast is ok and I never would have imagined Matthau in a musical especially opposite the likes of Streisand.  Some great catchy songs that I still can’t get out of my head.  Recommended!

MovieRob’s Favorite Trivia – Was the very first film released on home video (VHS and Betamax) in the US. It was in the fall of 1977 on the Magnetic Video Corporation label, back when it was an independent company, and was the first of the 50 original films it licensed from Fox. Its catalog number was CL-1001. (From IMDB)