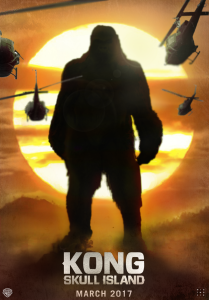 “This planet doesn’t belong to us. Ancient species owned this earth long before mankind. I spent 30 years trying to prove the truth: monsters exist.” – Bill Randa

Brief Synopsis – In the 70’s, a platoon of air-cav soldiers escort a group of scientists to a long lost island in the South Pacific to try and understand what actually happened there.

My Take on it – I’m not the biggest fan of monster movies but was still quite intrigued to see how they could potentially reboot the story of King Kong.

I was blown away by the special effects here and loved watching it all play out in a seemingly realistic fashion.

The idea to set it in the Vietnam War era was a great one because it allowed them to use stereotypical characters that we are all familiar with from that era in order to keep things fun and exciting at the same time.

In some ways, I believe that this storyline works even better than the original Kong storyline that was already filmed three times.

The energy and vigor of the characters (good and bad) makes for such an enjoyable and entertaining film that exceeded my expectations so much.

Amazing cast helps raise the stakes here because since there are so many familiar faces, you don’t know who will eventually survive or not (This IS a monster movie after all).

I’m actually quite excited to see where they plan to take this franchise because it has so much potential and unlike the Godzilla movie from two years ago, this one actually works extremely well and seems to be taking things in the right direction.

Bottom Line – Great reboot of the franchise which is so much better than the original Kong storyline. Loved the use of 70’s stereotype in the film to effectively give us lots of action and humor along the way. The special effects are amazingly done and it helps it all seem quite realistic looking. Superb cast helps raise the stakes because you know going in that not everyone is coming back out. Really looking forward to seeing where this franchise will go because this is a huge step in the right direction IMHO. Highly recommended!

MovieRob’s Favorite Trivia – Director Jordan Vogt-Roberts admitted that he was strongly influenced by video games from his childhood. That is why the movie contains many point-of-view shots of guns being fired (like in a first-person shooting game), and the shot of a helicopter making 360 degrees spins towards the ground was inspired by a similar scene from a Resident Evil game. (From IMDB)