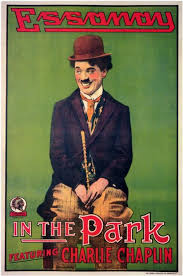 Brief Synopsis – A tramp strolling through the park comes upon numerous people who all seem to have different kinds of trouble.

My Take on it – Charlie Chaplin was known fro his great and innovative slapstick comedy during his career.

In this film, which is one of The Tramp’s first, he gets to have a lot of fun by putting his characters in situations where things get funny mainly due to the slapstick element.

The problem with this film is that there are some really funny slapstick moments, but the story itself is nearly invisible in general.

Not only does Chaplin have fun with the slapstick, but it seems as if all of the characters were asked to join in the fun and the slapstick is virtually non-stop.

Besides the slapstick elements not much really happens…

..but at least we get to enjoy some hilarious slapstick elements.

Bottom Line – Really enjoyed the typical Chaplin slapstick in this film. The story is a bit weak if not non-existent.  Always enjoy his antics and in this film he had a bunch of other characters join in on all the fun.  Not much else really happens here so just enjoy the slapstick!

MovieRob’s Favorite Trivia – In the Park is Charlie Chaplin’s fourth film released in 1915 by Essanay Films. (From Wikipedia)