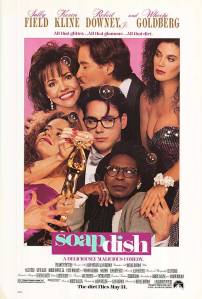 Brief Synopsis – A behind the scenes look at the drama of making a successful TV soap opera.

My Take on it – I was never really a fan of soap operas, but having four sisters helped me understand how they (sorta) work.

This film does a great job portraying the crazy aspects both behind and in front of the camera when trying to do one thing; keep the viewers interested and entertained.

They do a great job keeping this interesting both on and off the set and the surprises in these character’s real lives definitely mirror the kind of surprises one could expect from shows like the one presented here.

The truth is that the absurdity of it all is what helps make this film so much fun.

Things just get crazier and crazier as they move along and despite knowing that these things wouldn’t work in the real world, they work so well in this fictional one that mirror a soap opera itself.

The vast professions depicted here that must band together to get things done is great and we get to really see how much of a team effort TV shows (and movies of course) require in order to make sure it all works from start to finish.

The cast is amazing here and they help keep things interesting and entertaining the entire time.

Kevin Kline and Sally Field are both at the top of their game here but every one of the characters are extremely helpful in gfetting things done properly for this to be so much fun to watch.

Bottom Line – Amazing cast helps make this film so interesting. The drama shown both on and off the set are extremely fun and entertaining to watch unfold. The absurdity of it all is what makes it so enjoyable. Loved the way that things get crazier and crazier as things move along. The look at the vast professions that must band together to get thing done is presented really well. Recommended!

MovieRob’s Favorite Trivia – The number of times that Celeste Talbert (Sally Field) had been nominated for a Daytime Television Award was twelve. In real-life, (as of June 2015), Field has been nominated for three Golden Globe Awards for television productions, and nine Primetime Emmy Awards. These total twelve television nominations, the same number of times as her character has been nominated for the fictional Daytime Television Awards in this movie. In real-life, Field has won two Academy Awards from three Oscar nominations, and won three Primetime Emmy Awards.  (From IMDB)