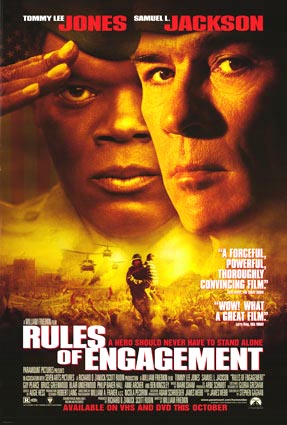 “Yes they had weapons! You think there’s a script for fighting a war without pissing somebody off? Follow the rules and nobody gets hurt? Yes, innocent people probably died. Innocent people always die but I did not exceed my orders. ” – Terry Childers

Brief Synopsis – After ordering his men to fire into a crowd of civilians supposedly harboring gunmen, an army Colonel must find a way to prove his innocence in a general court-martial.

My Take on it – This is a film that brings forth a premise that has so much potential yet fails to keep things as interesting as it could be.

This could very well have to do with the fact that this was made prior to the events of 9/11 which changed the way that the world looks at terrorist attacks and military conflicts in certain regions of the world.

Since the world we now live in is so different from the world where this film was made, it actually feels as if the whole plot is missing a great deal based solely on what knowledge we all have now.

Samuel L. Jackson and Tommy Lee Jones are both fine here, but they also both feel more restrained in these roles than they usually are.

The courtroom scenes also feel too tame for such a premise and also don’t work as well as one would hope.

The irony of this film is that if it were to be remade today, it would have such a completely different impact that it ever could have had back in the year 2000.

Bottom Line – Interesting idea that just doesn’t work as well as it could have. The fact that this was made pre-9/11 makes many of the scenes feel so outdated since they fail to take into consideration what we now know. Jackson and Jones are both fine here but they each also feel a bit restrained in their performances.  The courtroom scenes also feel too restrained for such a premise.  The issues brought up here are even more relevant today than they were back when this was made.

MovieRob’s Favorite Trivia – James Webb provided the story for the film, based partly on his own military experience in Vietnam and his tenure as the Secretary of the Navy under President Ronald Reagan; in 2006, Webb was elected as Virginia’s U.S. Senator. (From IMDB)