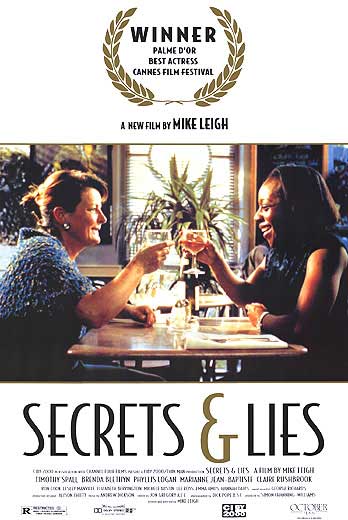 “Life isn’t fair then is it. Somebody always draws the short straw. ” – Maurice

Brief Synopsis – An optometrist living in London decides to try and find her real mother eventhough she has known most of her life that she was adopted.

My Take on it – This film works on numerous levels largely due to the fact that the story is quite simple and it focuses on the diverse characters more intensely.

The characters lives are all quite relate-able to almost anyone which allows us to care more about what they do as things move along.

The idea that most people have some kind of secret that they keep from others is also a very relate-able aspect of this film which helps the viewer identify with these regular working class characters who are all just trying to better their lives.

The story unfolds in a great way and as things are slowly revealed to us (and the characters), it pulls us in and makes us want to learn more about them.

This film develops the character really well and keeps the viewer interested in what happens to all of them.

This film was nominated for 5 Oscars that year; Picture, Director, Original Screenplay; Actress (Brenda Blethyn) and Supporting Actress (Marianne Jean-Baptiste) but didn’t manage to win any of them.

Bottom Line – Great idea that works really well because it gives us characters that are easy to relate to. The idea that we all have some kind of secret that we keep from others is very universal and the way this story unfolds keeps us interested the entire time. Nominated for 5 Oscars; Picture, Director, Actress (Blethyn), Supporting Actress (Jean-Baptiste) and original Screenplay but didn’t mange to win any of them.

MovieRob’s Favorite Trivia – To add a spontaneous effect to the performances, Mike Leigh met with each actor individually and only told them what their character would know at the beginning of the film. As filming progressed the actors were hearing the secrets for the very first time. Brenda Blethyn, for instance, didn’t know that Marianne Jean-Baptiste was black. (From IMDB)