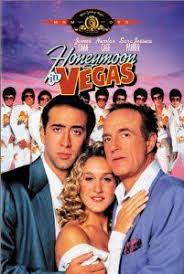 Brief Synopsis – A man who made a promise to his dying mother that he would never marry takes his girlfriend to Vegas in order to propose to her.

My Take on it – I recall seeing this film on a very rainy night on November ’92 and my 3 friends and I ran about a mile in the downpour to catch a bus home after seeing this.

I am NOT a fan of Nicolas Cage because I don’t think that he is such a good actor, but there are two roles of his that I can always get behind; the one in this film and the one in The Family Man (2000).

In this film, he somehow takes his sad sack image and transforms his character into a very likeable sad sack that we can root for.

As the film moves along we can feel the passion erupt within him as the story begins to move and he begins to globe hop.

This film is not a perfect romantic comedy and there are obviously flaws here, but it still stays engaging the whole time as it moves along the correct path.

James Caan plays the gangster role a bit too much over the top, yet still makes the role work.

Loved Pat Morita’s small but hilarious role as a cab driver and he truly stands out here.

The final scene of this film is quite heartwarming and I almost find myself start to cry as it all unfolds.

Bottom Line – Such a fun film. Cage is actually quite likeable in this film and we can really feel the passion erupt from within when the story starts to get moving. There are obvious flaws in the rom-com, but the fact that it stays engaging throughout is what keeps it going on the right path.  Caan is a bit too over the top in the gangster role, but it still works.  Morita is great in a small yet very humorous role. The final scene is actually quite heartwarming to watch unfold. Recommended!

MovieRob’s Favorite Trivia – Jack Singer’s detective agency is on the same floor of the same building as that of Max Bialystock in The Producers (1967). The door to Max’s office is shown in one scene in the hall. Jack is just down the hall and to the right of Max. (From IMDB)