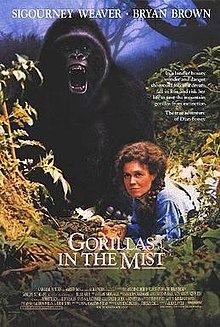 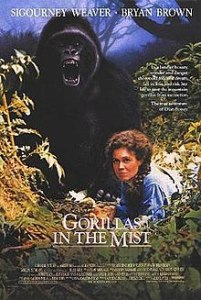 “Get off my mountain!” – Dian Fossey

Brief Synopsis – Story of a woman who journeyed to deepest darkest Africa in order to study the lives of gorillas.

My Take on it – This is a film that I recalled seeing numerous times on cable as a kid and was always fascinated with the way that the main character interacts with the animals.

Upon rewatching it, I can definitely understand how important and interesting this story is, but it just isn’t presented well enough.

Sigourney Weaver deservingly was nominated for an Oscar for Best Actress for this film especially since it’s quite easy to feel her characters passion for her work and goals throughout.

The story itself doesn’t manage to be gripping enough and eventhough some of the gorillas scenes are done extreemly well, something always feels missing the entire time.

Dian Fosse’s work with gorillas is still considered today to have been extremely groundbreaking and also helped bring the controversy of animal poaching to the forefront.

Unfortunately, they don’t manage to find the right formula to keep the story flowing and interesting the entire time.

Bottom Line – Interesting idea that just doesn’t work as well as it could. Weaver is amazing in the lead and was quite deserving of an Oscar nomination for Best Actress for this role because we can really feel her passion for her work. The story isn’t gripping enough and as fascinating as some of the scenes were humans interact with gorillas, something just seems a bit off the entire time.  Fosse’s work was definitely groundbreaking and managed to cause much controversy yet in this biopic of her life, they don’t manage to keep the story flowing.

MovieRob’s Favorite Trivia – The gorilla suits used in movies up to this time had obvious anatomical differences from real gorillas; for instance, the wearer’s real eyes were seen, forcing modification to the face. For this film director Michael Apted wanted to use real gorillas where possible, but some shots would have to use gorilla suits, so the difference would show. Rick Baker met the challenge and created gorilla suits good enough that Apted could do what he wanted. (From IMDB)