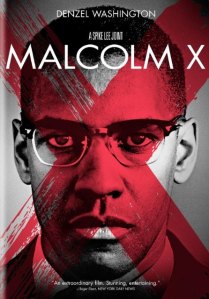 “[Witnessing Malcolm’s control over a mob] That’s too much power for one man to have.” – Captain Green

Brief Synopsis –Biography of one of the leaders of the Civil Rights movement in the 1950’s and 60’s who was one of the most vocal about what was truly transpiring around the country both from the pulpit as a Minister of the Nation of Islam and on the streets as a leader for equal rights.

My Take on it – As someone who has seen thousands upon thousands of movies in my lifetime, it’s rare that I come across an older film that just blows my mind and that’s what this film did for me.

This is an amazing biographical film that is able to tell such an epic story that at some points feels incredibly hard to believe because of the way things play out.

I’ve never been the biggest fan of Denzel Washington, but he does a superb job in the lead role of Malcolm X and there is no question in my mind about the fact that this is truly the best performance of his career and he will probably never be able to top that.

He was nominated for an Oscar for Best Actor for this role and should have easily beaten the other 4 nominees including eventual winner Al Pacino who won for his performance in Scent of a Woman (1992).

This story does an amazing job because its length allows for the proper development of the characters.

It also allows for so many interesting and poignant vignettes from the very controversial life of Malcolm X that a shorter film would have needed to skip over.

I knew practically nothing about his life beforehand and this film opened my eyes up to so many things.

Even at a near 3.5 hour run time, this film still feels like it sometimes needs to rush and is too short, but that’s part of the beauty of this film because it makes the viewer yearn to learn even more about this epic story that Director Spike Lee has presented us with.

This film will definitely be among my favorite films from 1992.

I can’t believe that it took me so long to finally see this near-masterpiece.

Bottom Line – Amazing biographical film that tells such an epic tale that is hard to actually believe is really true.  Washington is superbly cast in the lead and this is clearly his best performance of his entire career that he probably will never be able to match. He was nominated for an Oscar for Best Actor for this role and should have beaten Pacino, but apparently due to Academy sentiments, they chose to finally give it to Pacino.  The story does an amazing job developing the characters and due to the long run time of the film manages to tell us so many important and poignant parts of the life of this very controversial man. Even at nearly 3.5 hours, this film feels too short and it makes the viewer want to learn even more about the characters and events that have already been delivered to us so spectacularly by Lee. This will now be among my favorite films of 1992 and I am shocked that it took me so long to finally see this near-masterpiece of a film. Highly Highly Recommended!

MovieRob’s Favorite Trivia – At the film’s ending, when Nelson Mandela addresses a South African classroom, he quotes a Malcolm X speech directly. He refused to repeat the last four words, “by any means necessary”, so Spike Lee inserted black and white footage of Malcolm X saying it himself. The line originated in Jean-Paul Sartre’s play “Les Mains Sales” (“Dirty Hands”). (From IMDB)