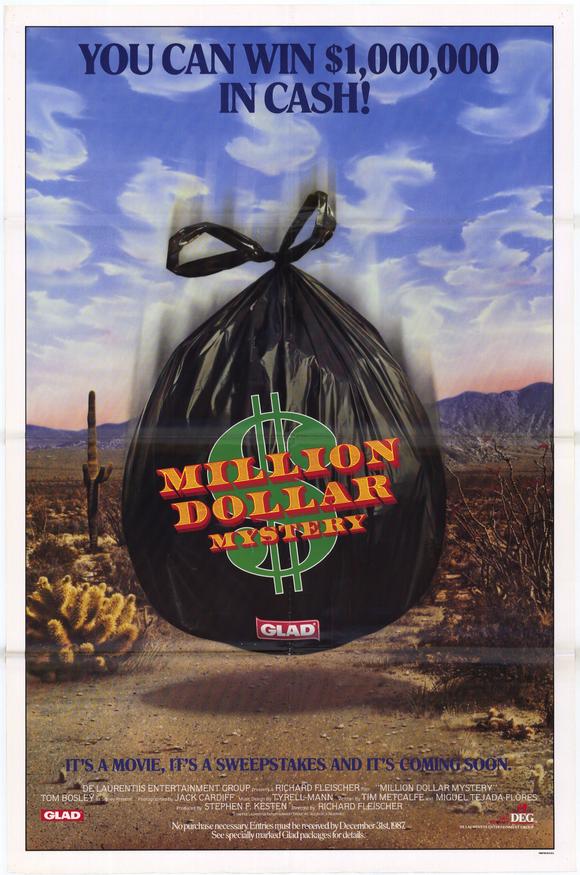 “What in the holy hell was he doing with a paper-shredder this big?” – Tugger

“Well, he worked for the government, didn’t he?” – Stuart

Brief Synopsis – A group of vacationers in a roadside highway encounter a dying man who claims to have hidden $4 million and gives them a cue as to how to find the money.

My Take on it – This is a film that I recall seeing when it came out and I also remember the hype that surrounded it since they gave everyone an opportunity to win $1 million if they guessed where the money was hidden correctly.

This movie is a very poor attempt at remaking the classic film It’s A Mad, Mad, Mad Mad World (1963) and fails in every aspects.

The characters aren’t interesting at all and the plot is so superficial that the characters keep managing to get from point A to point B with no effort what so ever.

In the end, this movie feels much more like a gimmick than an actual attempt at making an enjoyable movie to entertain the masses.

The cast is almost completely unknown and the only cast member who is recognizable (Tom Bosley) dies wihin minutes; the rest are mostly character actors who pop up in many other films of the era, but none really have star power.

The film is quite predictable and works in a cyclical fashion through all 3 stops of the treasure hunt.

This is a film that makes so little sense and feels like they created a movie as a ploy to get viewers (and non-viewers since the clues were also available without seeing the film) involved in a treasure hunt that ended up costing the studio much more than they expected since this film flopped completely.

Bottom Line – Terrible remake of It’s A Mad, Mad, Mad Mad World (1963).  The film seems more like a gimmick than an actual story because the plot is so superficial and very little that happens follows a true pattern. The cast isn’t able to help the story move along since most of them are complete unknowns and the most famous actor involved in the film (Tom Bosley) dies within minutes. The film makes so little sense and just seems like aplot to try and get viewers (and non-viewers) involved in a real treasure hunt for more money than the film actually made (see Trivia below).

MovieRob’s Favorite Trivia – Glad Bags and DeLaurentiis Entertainment co-sponsored a real-life million-dollar “treasure hunt” to coincide with this film’s release. At the end of the movie, the cash is still missing, and moviegoers were invited to find the location of the hidden stash, using clues provided in the film (the sponsors also emphasized that the money wasn’t PHYSICALLY hidden anywhere, lest anyone injure themselves or damage property while searching for the loot; the audience just had to GUESS where the money was hidden). Ticket buyers were even given game cards shaped like American currency – with a big photo of Dino De Laurentiis where the President should be. In the end, it was a big disaster for the studio. The film was one of the major flops of the 1980s, barely grossing a million dollars at the box office, which the studio wound up forking over to the contest winner, a woman in Bakersfield, California. (Incidentally, the money was hidden in the bridge of the Statue of Liberty’s nose). (From IMDB)