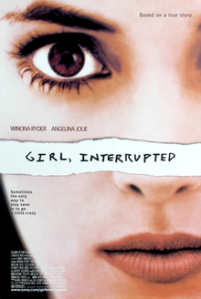 “You know, taking us for ice creams in a blizzard… makes you wonder who the real whack jobs are.” – Susanna

Brief Synopsis – After attempting suicide, a teenager is committed to a mental hospital where she befriends other troubled girls.

My Take on it – This is a film that I saw once a bit over a decade ago but didn’t recall anything about it.

The story works quite well because they allow us to see the kind of issues that affected young women in the era that this film takes place.

Winona Ryder is great in the lead and really manages to make us believe the situation that she finds herself in.

Angelina Jolie does a wonderful job in a supporting role as another institutionalized women who does all she can in order to rebel against any kind of authority figure.

She was able to win an Oscar, Golden Globe and SAG award for her performance here.

Really liked the way that they integrate the narration into the story especially since this film is based original on diary entries that can be verbalized better than visualized.

This film manages to give us some deep insight into the psyche of an abused or ignored young woman during the 1960’s which in turn helps us get a better understanding of their way of life.

Bottom Line – Interesting story that works quite well because we get to see the various issues that these girls all must battle. Ryder is great in the lead and really gives us a realistic approach to her character. Jolie is also great in a supporting role as another girl who constantly rebels against authority in the hospital and in life.  She won an Oscar for her portrayal here for Best Supporting Actress. The narration works extremely well especially since this film is based largely on the diary entries of the time that the author spent in such a ward.  Gives some nice insight into the psyche of abused or ignored young women in the 60’s and helps us get a better understanding of their way of life. Recommended!

MovieRob’s Favorite Trivia – Angelina Jolie avoided any communication with Winona Ryder when making the movie, claiming that if she saw anything human about Winona Ryder, she would not have been able to act out the sociopath character of Lisa Rowe as effectively. (From IMDB)