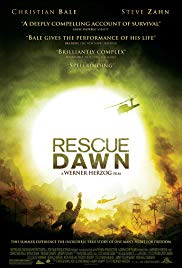 Brief Synopsis –An American pilot taken prisoner in Vietnam does all he can to try and survive.

My Take on it –  This is a film that is based on a true story of survival in the most dire circumstances.

The overall story is actually quite incredible, but the fact that things aren’t presented well enough hurts things too much.

The movie is overlong and too many scenes drag on for too much time inexplicably.

Christian Bale is known for his ability to change his appearance in film and this time, he went to the extreme and is hardly recognizable.

Jeremy Davies and Steve Zahn also give great performances here, but both of them portray significant yet very small roles and they don’t have enough screen time to really show their talent.

The story itself gets a bit convoluted along the way and it sometimes feels as if the plot is wandering around too pointlessly for its own good.

The film shows the survival aspects of things really well despite the fact that things drag a bit too much along the way.

The survival aspects along with the performances warrant a look at this film at least once despite the fact that it has much too many faults along the journey.

Bottom Line – Incredible story that isn’t presented well enough which hurts things too much. Bale is amazing in the lead role and his transformation is breath taking but the story drags along a bit too much an gets too convoluted along the way.  Zahn and Davies also give transformative performances but their characters have small roles despite their importance. The survival aspects of the story are told well even if things are stretched out too much and for those reasons along with the performances it’s worth checking this film out at least one time even if this film has numerous faults along the way.

MovieRob’s Favorite Trivia – The film was shot in reverse continuity so Christian Bale, having worked hard to lose weight for the role, would appear the gauntest at the end, and then could simply gain the pounds back over the course of filming, working backwards through time so that when Bale returned to his average weight he would be filming his scenes as Dengler prior to being taken prisoner. (From IMDB)