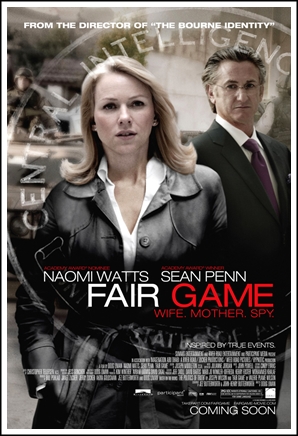 “You did your job. You should feel good. They count on that. That’s why they don’t pay you.” – Valerie Plame

Brief Synopsis – Based on the true story of how a deep cover CIA operative was exposed by government official via the media after her former ambassador husband spoke out against the US Administration.

My Take on it – This is a film that I saw not long after it came out and recalled it being quite good.

They manage to find a way to make this story quite fascinating throughout.

The fact that this thriller is based on true events also enhances the story and makes it even more engaging to watch unfold.

Naomi Watts and Sean Penn are both superb here and they are able to make us believe the various pain and anguish that they suffer as they are attacked from various sides for doing what they believe was the right thing to do.

The pacing of this film is great and they manage to present many complex political issues and make them understandable to anyone while still keeping things interesting throughout.

Watts shines brightest throughout the film because we get to see how she needed to juggle many aspects of her life all at once and does so with such precision and ease that we can definitely sympathize with all she must go through.

Bottom Line – Very interesting thriller that is enhanced by the fact that it is based on true events. Watts and Penn are both great here and make us really believe the pain and anguish that they must endure as they are attacked for doing what they think is right.  The storyline moves along at a great pace and despite dealing with many complex political issues, they find a way to keep it down to Earth and interesting throughout.  Watt’s character shines throughout because we get to see here juggling the various aspects of her life quite well with what seems like much ease. Recommended!

MovieRob’s Favorite Trivia – The father of the film’s director Doug Liman, Arthur Liman, was counsel for the United States of America Senate during the Iran-Contra hearings. Director Doug Liman said he thought frequently during the production of a remark by Justice Louis Brandeis [Louis D. Brandeis] that his father often quoted, which was: “-‘Sunlight is said to be the best of disinfectants.’ I went into this film very much with idea of truth in mind. I felt my father’s presence on the set every day in each aspect of development and creativity down to the smallest detail. I wanted everything to be completely accurate. Liman added: “What I’d like people to take away from Fair Game (2010), is a feeling of hope. I want the audience to love and respect Valerie and Joe [Valerie Plame Wilson and Joseph Wilson] as much as I do.” (From IMDB)