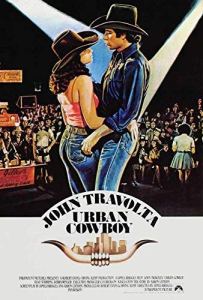 “All cowboys ain’t dumb. Some of ’em got smarts real good, like me.” – Bud

Brief Synopsis – A country boy travels to the big city where he learns about life and love in the local bars.

My Take on it – This is a film that I heard about when it was on cable in the early 80’s yet never had any desire to see what it was all about.

I have been recently trying to wtach more films starring John Travolta, so I decided to finally give this movie a try.

The overall premise is an interesting one yet it doens’t manage to work well enough.

The story itself drags along too much and this film could have been a bit shorter and possibly much tighter.

The characters all feel like stereotypes and caricatures and they all end up acting like we would expect them to which ends up making things a bit too predictable the whole way through.

The best part of this film is the music and they find some nice ways to integrate it into the story line allowing us to hear some enjoyable country western songs.

Travolta is ok in the lead and Debra Winger is also fine in the role of his girl but their chemistry together is somewhat lacking which unfortunately doesn’t allow for things to  translate very well into something that one would consider to be much more memorable to watch which is quite a shame because they could have found a way to have done more with these characters and situations.

Bottom Line – Interesting idea that just doesn’t work well enough.  The story drags along too much and they could have shortened things a bit to make it come across as being much tighter. The characters are all pretty much stereotypes and that hurts things because they all act as they should which keeps things quite predictable along the way. The best part of this film is the music which is quite enjoyable to listen to the whole time.  Travolta is fine in the lead and his chemistry with Winger is just ok and doesn’t translate into something more memorable like one would expect which is a bit of a shame.

MovieRob’s Favorite Trivia – At the time the film was shot, Gilley’s, used as the film’s main nightclub location, was the largest nightclub in the world in terms of available space for the patrons, according to the Guinness Book of World Records. (From IMDB)