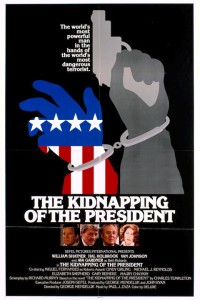 I’ve been in politics for over thirty years, and nobody has wanted the Presidency more than me. But all I’ve got to say is that I’m glad that you’re not the one making this decision.” – “Vice President Ethan Richards

Brief Synopsis – After the President is abducted by terrorists while in Canada, the Secret Service and the Vice President try to find a way to save him by using military and political tactics and options.

My Take on it – This is a film that I had never heard of before coming across it in my research for films to watch for this blogathon.

The film actually had a great premise yet the execution just isn’t up to par.

The story is presented in a very sloppy way that takes away from any real kind of impact here.

The cast is quite talented, yet the script doesn’t develop any of them enough which hurts things too much.

William Shatner is an interesting choice for the lead and plays his Secret Service character far too over the top, which could be expected from him but it fails to help serve the plot and story that way.

Hal Holbrook looks very presidential in his role here but he isn’t given enough to do besides be a damsel in distress though most of the movie.

Van Johnson is great as the Vice President because he is able to give us a character who is motivated by both his emotions and his politics, yet is ultimately led by his conscience in both good and bad ways as things develop.

Bottom Line – Interesting idea that just isn’t presented well enough. The story is a bit too choppy in the way that it presents things.  The cast is quite talented, yet they are given very underdeveloped characters which hurts things too much. Shatner presents his character in a very over the top fashion which suits him yet doesn’t serve the plot well. Holbrook is very Presidential looking here, but he isn’t given enough to do to try and make things even more plausible. Johnson is great as the Vice President because we can see how politics and emotions can come together both for better and for worse along the way.

MovieRob’s Favorite Trivia – This movie was released five years after its source novel was first published. The novel’s original title was “The Hostage”. The film is the only theatrical feature based on a story by author Charles Templeton. (From IMDB)