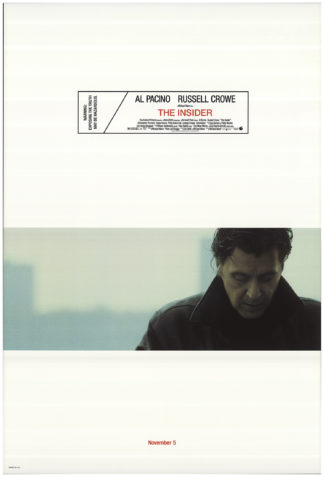 Initial Viewing Memories – I saw this film on opening weekend and was so impressed by the gripping and powerful story that is literally ripped from the headlines and has impressed me every time that I’ve seen it ever since.

“You pay me to go get guys like Wigand, to draw him out. To get him to trust us, to get him to go on television. I do. I deliver him. He sits. He talks. He violates his own f*cking confidentiality agreement. And he’s only the key witness in the biggest public health reform issue, maybe the biggest, most-expensive corporate-malfeasance case in U.S. history. And Jeffrey Wigand, who’s out on a limb, does he go on television and tell the truth? Yes. Is it newsworthy? Yes. Are we gonna air it? Of course not. Why? Because he’s not telling the truth? No. Because he is telling the truth. That’s why we’re not going to air it. And the more truth he tells, the worse it gets!” – Lowell Bergman

Brief Synopsis – A producer for the TV news show 60 Minutes, does all he can to help a whistleblower from a Tobacco company tell his story to the world.

My Take on it – Extremely powerful film that resonates so well no matter how often one watches it. Russell Crowe does an amazing job in the lead role and proves with this film how great a dramatic actor he can be.  This is IMHO the very best performance of his career.  The story moves along at a great pace and they bring up so many issues about journalistic integrity that manages to stay so poignant as things unfold. The story must also deal with a persons own integrity regarding how they deal with themselves and with the truth of everything that erupts around them.  Al Pacino is also great here and allows us to see how much his character cares about his job as a producer along with his integrity for protecting his sources. Amazing story that is able to stay so suspenseful, thrilling and engaging from start to finish. Christopher Plummer is also superb as Mike Wallace, the anchor of 60 Minutes. Highly Highly Recommended!

MovieRob’s Favorite Trivia – While he was promoting The Loudest Voice (2019) on the Howard Stern show, Russell Crowe revealed that he received a book from the Marlon Brando estate, written by poet Patrick Kavanagh with an inscription to Brando by Jack Nicholson. Crowe had been told that Brando was a big fan of this movie because of his performance and watched it repeatedly. Brando had instructed his caretaker that when he died, he wanted Crowe to receive the book. Brando has also worked with Crowe’s co-star Al Pacino in The Godfather (1972). (From IMDB)