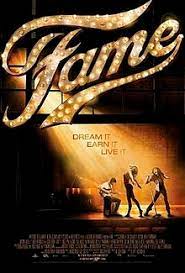 “There are some things success is not. It’s not fame. It’s not money or power. Success is waking up in the morning so excited about what you have to do that you literally fly out the door. It’s getting to work with people you love. Success is connecting with the world and making people feel. It’s finding a way to bind together people who have nothing in common but a dream. It’s falling asleep at night knowing you did the best job you could. Success is joy and freedom and friendship. And success is love.” – Jenny Garrison

Brief Synopsis – A look at the students and faculty of a prestigious high school of the performance arts in New York.

My Take on it – Great idea that is done in an interesting way, yet is bogged down by the trying to do so much in such a short period of time

The characters aren’t developed on anything more than a cursory level which makes it so much harder to care about any of them or about what they do along the way.

The choice to make the timeline of the film 4 years is also detrimental to things because it feels far too rushed in everything that they do along the way.

That idea worked in the TV show and that actually made sense, but truncating 4 years into 2 hours here, just doesn’t work at all.

This film has a great cast especially in the roles of the teachers with Kelsey Grammer, Charles S. Dutton, Bebe Neuwirth, Megan Mullally and Debbie Allen, but none of them are given enough to do here in order to help make things even more enjoyable to watch unfold.

MovieRob’s Favorite Trivia – In contrast to the original Fame (1980) which was rated R, this remake was made as a PG rated film in order for it to have a wider appeal for audiences. As a result, the abortion subplot was omitted, the language was toned down, and Kevin’s homosexuality was made subtle. (From IMDB)