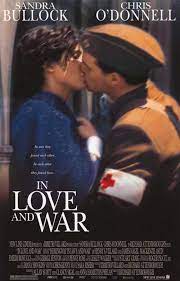 “You know what I’ve been told? Italian men respect their wives. They spoil their mistresses. But the only women they love are their mothers.” – Agnes von Kurowsky

My Take on it – This is a film that I was quite interested in seeing due to the fact that it has two great stars and a stellar director.

Unfortunately as great as both Sandra Bullock and Chris O’Donnell are as actors, they have terrible chemistry here and it is quite unbelievable that these two characters could truly fall in love with one another.

The story moves along at a really slow pace and that also doesn’t help make things more interesting or engaging to watch unfold.

The love story is somewhat romanticized here and unfortunately it isn’t as powerful as Hemingway’s own version of this tale that is considered to be among his best works.

Richard Attenborough is also an amazing director and was able to give us some amazing films, but this one just doesn’t come across powerfully enough in the way that it is all presented.

None of the characters are developed on more than a superficial way and it makes it even more difficult to care about what happens to them along the way.

The best part of this film is the music which works well even though it isn’t able to elevate things to a higher level.

MovieRob’s Favorite Trivia – Henry Villard’s own son was the driving force behind getting this movie made. (From IMDB)