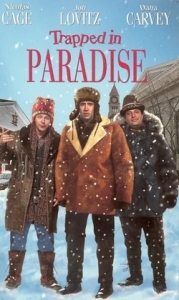 “In the Firpo family, the man with half a brain is king.” – Bill Firpo

Brief Synopsis – Three mismatched brothers end up in a small town to rob a bank and end up getting stuck there.

My Take on it – Terrible film that doesn’t work at all despite a great cast.

Nicholas Cage, Jon Lovitz and Dana Carvey are unlikely brothers, and having the three of them in this film together could have been a gold mine in the 90’s, but the premise is so silly that even the comic characteristics of all of them doesn’t translate in this setting.

The film loses it’s way quite quickly and that also hurts things because even the characters seem confused as to what they are suppose to do.

The dialogue is atrocious and nothing that happens here really makes sense and that is such a shame due to the potential that they fumble here.

MovieRob’s Favorite Trivia – The town in ‘Trapped In Paradise’ had to appear virtually buried in snow so that the characters were “trapped” and couldn’t leave. So filmmakers supplemented real snow with 75,000 pounds of custom-made, biodegradable potato flakes from Idaho. (From IMDB)