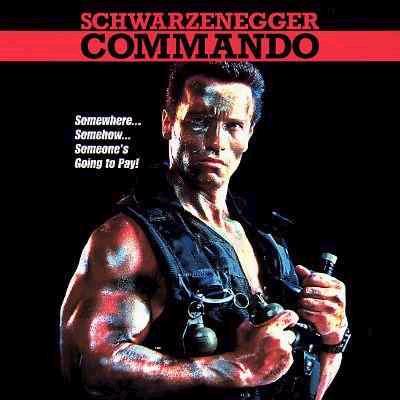 [after killing a man in the plane] “Don’t disturb my friend, he’s dead tired.” – Matrix

Brief Synopsis – A former special forces commando is forced to take on a small army when his daughter is kidnapped in an attempt to force him to assassinate a Central American dictator. Don’t mess with Arnie 🙂

My Take on it – I remember when this came out when I was 11.  I saw it in the theater with some friends and then when it came out on cable a few months later I recall seeing it so many times.

My friends and I would always quote the “Arnie” lines from this movie and never gave much thought to the excessive violence.  The official death count in this movie is…(Spoiler alert) 81. That’s a lot of dead baddies, but that’s what happens when you mess with Arnie 🙂

Look for a very young Alyssa Milano as Arnie’s daughter.

Upon re-watching this movie, I still could chuckle at the Arnie lines, but the plot, acting and just about everything else is beyond awful. Rae Dawn Chong is completely miscast as a flight attendant who reluctantly helps Arnie.

Bottom Line – Lots of great “Arnie” lines, lots of death and destruction, but silly plot and terrible acting. Loved it much more as a kid.