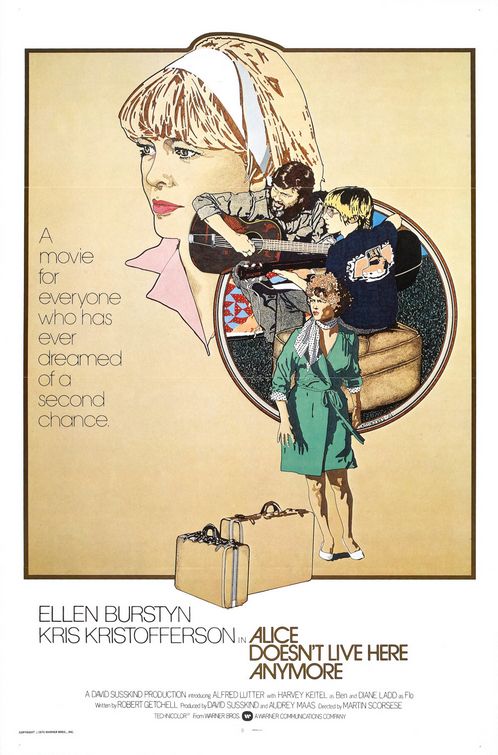 “Put in another quarter and try again… ” – Tommy

My Take on it – This is one of Martin Scorsese’s first movies and it’s quite interesting to see that some of his future films have their basis in this non-typical themed film by him.

Most notable is Harvey Keitel who became a staple of his for years. Here he plays a normal guy who has bouts of rage that come out at times completely unexpected. Keitel plays this kind of character so well.

The rest of the cast is great with Diane Ladd, Vic Tayback, Kris Kristofferson and Jodie Foster bringing their talent in supporting roles.

The standout here tho is obviously the lead character played by Ellen Burstyn who is superb and rightfully won an Oscar for her role here.

The story is sound overall and quite interesting despite being slow every now and then.

This movie was the basis for the hit TV sitcom Alice staring Linda Lavin with some of the characters from the movie returning for the show. Most notably is Vic Tayback as Mel the diner chef and owner.

Bottom Line – Great cast. Interesting story and characters that was the basis for a hit tv sitcom. Not your typical Scorsese fair but still has a young Harvey Keitel showing how scary he can really be. Burstyn is great here in the title role and definitely deserved her Oscar for this performance. Recommended!

MovieRob’s Favorite Trivia – Diane Ladd’s daughter Laura Dern can be seen in the final diner scene – she is the little blonde girl with glasses sitting at the end of the counter eating an ice cream cone. As Dern would recall years later, it was after the 19th take – and exactly that many cones consumed – that director Martin Scorsese informed Ladd that if her daughter could do that without throwing up, she had to be an actress.  (From IMDB)