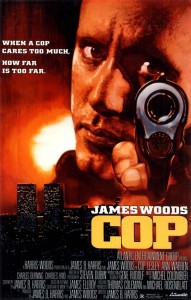 “You blow away a broad’s date, the least you can do is drive her home.” – Hopkins

Brief Synopsis – A detective believes that a murder is connected to a possible serial killer and is willing to go to all lengths to find the murderer.

My Take on it – It’s always interesting to see films from the 70’s and 80’s that nowadays would have been relegated to a prime time procedural slot.

This is a perfect example of a movie that would fit that kind of formula.

Instead of a two hour movie, this could have been easily wrapped up in 42 minutes and it would have the same resulting feeling because it’s quite typical.

I have always enjoyed James Woods’ roles, but he does a better job as a bad psychopath than as a cop trying to catch a killer.

That being said, he does a fine job here, but the role might have been better served with someone other than him.

All in all, this film is average and not too memorable because the story and the characters just aren’t developed well enough for us to care about them.

Bottom Line – Woods is a great actor, but is just good here.  I always liked him better as the bad guy psychopath because that’s the kind of role he excelled in. The story feels like a typical TV show procedural and could have been wrapped up neatly in 42 minutes on any procedural of your choice.

MovieRob’s Favorite Trivia – The novel “Blood on the Moon” upon which the movie is based was rejected by 17 publishers due to its violent content. (From IMDB)