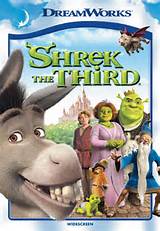 Break a leg. On second thought, let me break it for you. ” – Shrek

Brief Synopsis – When Fiona’s father the king becomes ill, Shrek must take over duties as king.

My Take on it – There are lots of franchises that keep spewing out films every few tears despite the fact that they rehash many of the same ideas and this film fits clearly into that category.

I’m actually shocked that I never saw this film beforehand or even the following film in the franchise.

There are too many scenes that just aren’t really that funny and it feels as if it’s going through the motions instead of trying to be innovative in the way that they tell the story.

There are some funny parodies in this film of other movies and/or fairy tales, so it isn’t a total and complete loss but it just doesn’t work as well as the previous two films did.

It seems as if the creativity dwindles more and more as the franchise keeps moving forward.

The voice cast, as always is superb and it was pretty funny listening to yet another Monty Python alumni playing one of the characters with Eric Idle joining in to play Merlin as you’ve never seen him before.

Unfortunately despite the great voice cast list, they can’t do anything to save this film from being just an average fairy tale spoof instead of groundbreaking like the original Shrek (2001) was.

Bottom Line – Mediocre addition to the franchise which just feels like its going through the motions. Has some fun parodies of other movies and fairy tales yet doesn’t work as well as the previous two films. As always, the voice cast is superb but that still can’t save this from feeling just average whicgh is a shame since the original Shrek (2001) was truly groundbreaking.

MovieRob’s Favorite Trivia – Eric Idle, upon seeing the “coconuts as horse hoof sound effects” segment in the stage show scene, admonished the makers of the film publicly. He claimed they were ripping off Monty Python and the Holy Grail (1975) and “stealing” their joke. He perhaps failed to realize that coconuts have been used as horse hoof beats since the days of radio – whence Monty Python were no doubt inspired. (From IMDB)