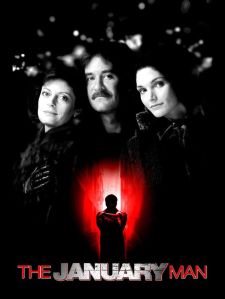 “I’m going to go home, mix some paint, and try to create something original. ” – Ed

Brief Synopsis – After a serial killer strikes again, the mayor and chief of police decide to reinstate a former detective in order to solve the crime.

My Take on it – This is a film that I recall seeing a few times on cable back in the 80’s but didn’t really recall that much about it.

Apparently, the reason for this is that there aren’t too many memorable points to this film.

Kevin Kline and Mary Elizabeth Mastrantonio have great chemistry together and since they are great actors, they are fun to watch.

The plot is extremely silly and the script is filled with so many holes in it that they leave you in the end with much more questions than answers which is quite frustrating.

The thing is, it doesn’t even make a difference since the story isn’t interesting enough to care.

The film cant decide what kind of genre it wants to portray and it jumps from thriller to satire to romance without tryng to follow through on any of them.

Guess my memories of this film aren’t that great since I at least believed that it was someone interesting back then.

Another baffling thing about this film is the fact that the entire supporting cast is also great with Susan Sarandon, Harvey Keitel, Danny Aiello, Rod Steiger and Alan Rickman all lending a hand here.

I can’t understand why such a great list of actors would sign up to make a film this bad.

Bottom Line – Terrible film eventhough Kline and Mastrantonio are both great here. The plot is quite silly and is filled with so many holes and unanswered questions that by the end you have more questions about it all then one should. The supporting cast is great which is also baffling since so many great actors decided to sign on to a film like this.