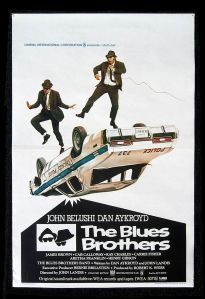 Brief Synopsis – After being released from prison, Jake and his brother Elwood try to get their band back together in order to help save the orphanage that they grew up in.

My Take on it – This film is hilarious every time I see it.

John Belushi and Dan Aykroyd were born to work together and they are superb together here because it all flows so well between them.

This film gets crazier and crazier as things move along and it somehow gets better the crazier it gets.

The jokes are really funny and the the fact that they are able to perfectly mix the physical comedy with amazing dialogue helps bring this up another level.

They wreck so many cars in this film and they somehow find so many interesting and fascinating ways to destroy more and more as the film moves along.

The music is blended so well into the story and it all comes together nearly perfectly.

John Landis did an amazing job directing this film and knowing how much he loves to add cameos to his films, it is so much fun constantly being on the lookout for new and interesting faces lurking around the corner, waiting to appear.

This is by far one of the best, if not THE best film adaptation of a former Saturday Night Live skit largely due to the energy that the story and characters bring forth here.

Love Carrie Fisher’s character since we know so little about her, yet look forward to her popping up again and again.

This is such a classic Belushi film and is his best role over his unfortunately short film career.

Bottom Line – Hilarious film that works so well despite its craziness. Belushi and Aykroyd are perfect as the scheming brothers.  The jokes are amazingly done because we get so much physical comedy along with the dialogue.  The amount of cars wrecked here is unbelievable and they just wreck more and more in such fascinating ways. The music is perfectly used in the film and it all comes together so well.  Landis’ use of cameos helps make the story stay even more interesting because you constantly look to see who will pop up out of nowhere. One of the best films to come from an SNL skit. Highly Recommended!

MovieRob’s Favorite Trivia – A world record (at that time) one hundred three cars were wrecked during filming. This feat was exceeded two years later, when one hundred fifty cars (and a plane) were crashed for H.B. Halicki’s The Junkman (1982). That record held for two decades, until over three hundred cars were wrecked during the filming of The Matrix Reloaded (2003). (From IMDB)