Thanks to Dell of Dell on Movies for this recommendation. 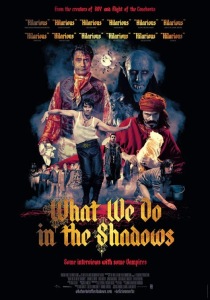 “One day I was selling my wears, and I walked passed this old creepy castle. And I look at it and think, “‘very old and creepy”. And then this creature… flies at me! It dragged me back to this dark dungeon. And bit into my neck. And just at the point of death; this creature forced me to suck its foul blood. And then it opened it’s wings, like this. And hovered above me. Screeching. ‘Now you are vampire.’ And it was Petyr. And we’re still friends today.” – Deacon

My Take on it – As you all probably already know, I am not a fan of horror films and was a bit concerned before seeing this film because of that.

Boy, was I surprised at how much I enjoyed this film that parodies vampire movies and shows how a group of vampires would live their lives if they were around today.

The documentary style of this film works really well and similar to films like This is Spinal Tap (1984), gives us a unique view of a fictional group of characters with unique abilities.

This film does a great job of parodying numerous famous fictional vampires and since I’m not really the biggest fan of those stories, I’m sure I missed a lot of the references, but even for a non-fan like me, there was so much to enjoy here.

Also loved the way that they show how the world of vampires coincides with the world of other “horror” groups like werewolves for instance and has them interact with one another sometimes as friends and sometimes as adversaries.

Bottom Line – Hilarious film that really hits things on the mark. They do a great job parodying famous fictional vampires and showing how they would act of they were living in today’s world.  As a non-fan of horror, I’m sure that I missed out on a lot of the references, but they did this really well even from my perspective.  The added bonus of showing various other “horror” clans makes this really fun to watch due to the way they all interact with one another.  Recommended!

MovieRob’s Favorite Trivia – About 125 hours of footage was shot, most of which was improvisation from the cast. The process of editing that down to a 90-minute movie took almost a year. (From IMDB)