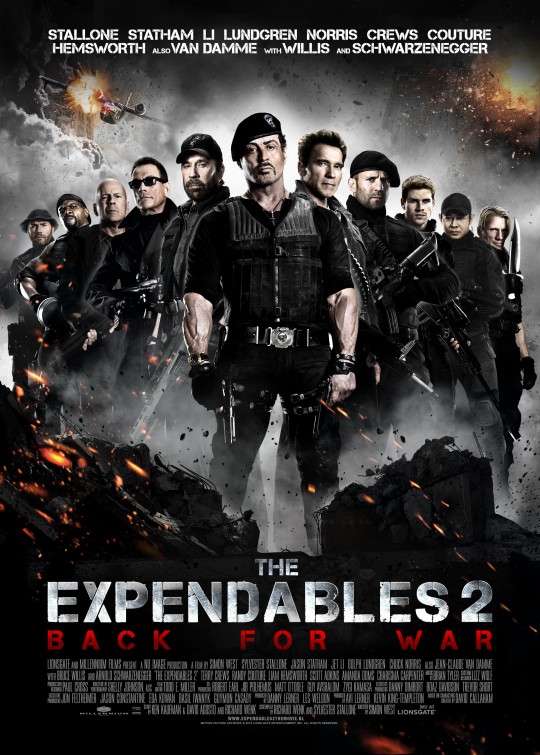 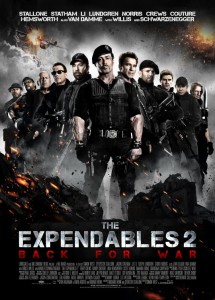 “That’s how we deal with death. We can’t change what it is, so we keep it light until it’s time to get dark. And then we get pitch black. ” – Barney Ross

Brief Synopsis – The band of “familiar” mercenaries are hired for another mission for the CIA that is supposed to be a simple one until they find out who they are up against.

My Take on it – Since this milestone marathon actually coincides with my attempt to watch all of Arnold Schwarzenegger films, I chose to check out this trilogy that is mean to be a modern throwback to 80’s action films.

This film is a slight improvement on the previous one but that has largely to do with the fact that they chose to have some of the heroes from the 80’s that we know and love interact more with one another and actually have them do more of a team thing than in the last film.

This all feels like a gimmick to earn more box office love.

If so, it doesn’t matter since that idea happened to work.

It was nice seeing many of the cast from the previous film return and they give us a few new 80’s heroes to join in on the fun with the additions of Chuck Norris and Jean-Claude van Damme.

The action is this film is blown totally out of proportion and there is lots and lots of death and destruction that follows these men all around the world.

They managed to eclipse the body count of the previous film and this time we get 482 dead.

This is yet another film that is solely a popcorn film, so check your brain at the door and get ready for lots of 80’s one-liners.

Bottom Line – Another film that delivers exactly what one would expect and nothing more.  The choice to have the 80’s action heroes work even closer this time is part of the gimmick to do better at the box office (which happened to work). Enjoyed seeing many of the “old” faces from the 80’s returning with a few new additions including Norris and Van Damme. The action is once again over the top and there is lots and lots of death and destruction that follows these men wherever they venture.  Another fun popcorn flick that takes away the need to care about what will actually happen.

MovieRob’s Favorite Trivia – Sylvester Stallone explained that his casting was looking particularly for actors who had not experienced recent hits: “I like using people that had a moment and then maybe have fallen on some hard times and give them another shot. I like those kinds of guys. Someone did it for me and I like to see if I can do it for them.” (From IMDB)