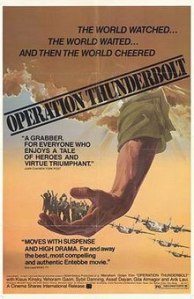 “Ephraim, what are you staring at?” – Alma Raviv

“Oh stop it. They’re tourists, just like us.” – Alma Raviv

Brief Synopsis – After a plane is hijacked en-route from Athens to Paris, the decision must be made as to whether to concede to the terrorist demands or find a way to rescue the hostages.

My Take on it – This is clearly the best version of the 4 films depicting the events of the Air France hijacking and subsequent rescue mission.

Menahem Golan who directed the film had the full support of the people who took part in the events depicted which helps make the story even more realistic and genuine in its portrayal of everything that happened.

The choice to have all of the characters speak in the native languages and keeping things international was an excellent choice because it allows for everyone to see that these kind of events are universal and not specially related to one culture or another.

Yoram Gaon is superb in the main role of Yoni Netanyahu and does a wonderful job showing what kind of person he was that led to him being chosen to lead this mission.

The idea to use real footage of politicians involved in the debates surrounding the events was a good one because it gives the film a documentary feel which makes things seem even more genuine as if we are watching the events as they are unfolding in front of us.

The music is subtle and works really well to keep things emotional as certain points.

This is largely due to the fact that Gaon himself sings the theme song.

This is the most impactful and genuine feeling of the 3 films made about these events less than a year after they actually took place.

Bottom Line – Clearly the best version of the 4 films about these events. The fact that they had the full support of those who took part in the events portrayed helps make it feel even that much more realistic. The choice to keep this story international was a good one and each of the characters speaks his or her own language which helps make things feel even more authentic. Gaon is superb in the lead role and plays the part of Yoni Netanyahu so well. The use of real footage of politicians instead of having actors play them helps make this film feel more like a documentary than teleplay which also makes the viewer feel as of they are watching the events as they really unfold. Great music that is quite emotional largely due to the theme song about Yoni sung by Gaon himself. Amazing production all around that is the most impactful of the three films made within a year of the events themselves. Highly Recommended!

MovieRob’s Favorite Trivia – Originally filmed with all characters speaking in Hebrew, French, German, Arabic, or English per role, the film was shot a second time concurrently in an all-English version for the international market. With permission from the Globus Group, a number of documentaries on the rescue use footage from the movie alongside dramatizations of the events. (From IMDB)

One thought on “Operation Thunderbolt (1977)”