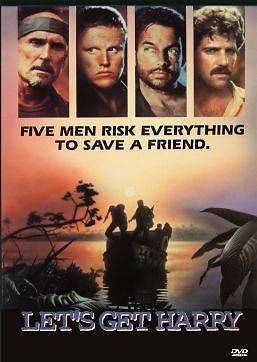 “The Indians say that if you spit after a close call, you’ll be protected in the future.” –

Brief Synopsis – A group of blue collar workers decide to travel to South America to free a friend who has been kidnapped by terrorists.

My Take on it – This is a film that I recall seeing on cable a few times as a kid and didn’t realize at the time how absurd the whole premise truly was.

The way that the plot is executed is completely laughable the entire time.

The action scenes are more comical than thrilling and it all just doesn’t work very well at all.

The story moves in an awkward fashion and there are too many holes in the way that the plot is presented to us.

Some of the cast of this film are quite talented yet they for some reason signed on to be a part of this mess.

They include Robert Duvall, Mark Harmon, Michael Schoeffling (Sixteen Candles (1986) fame), Thomas F. Wilson (from the Back to the Future Trilogy), Rick Roosevich and even Gary Busey.

This film is actually proof to all of us that not everyone can be a true action hero and that the rest of us should leave things to those that have been trained properly in order to do what is needed.

Bottom Line – Terrible idea that is executed in an absurd manner. The cast is quite talented and I’m surprised that many of them chose to sign on for such a silly idea.  Instead of being an action thriller, its much more of a farce yet it proves that not everyone can be a real action hero and that most of us need to leave the real fighting to those with proper training.

MovieRob’s Favorite Trivia – Director Stuart Rosenberg didn’t have his name on the movie, and was billed as “Alan Smithee”, which is a pretend film industry name used by directors who don’t want their names on a movie. “Variety” reported “Stuart Rosenberg took his name off the credits, reportedly due to a contretemps during post-production.” (From IMDB)