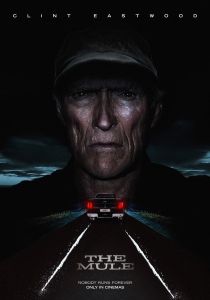 “You’re right. I thought it was more important to be somebody out there than the damn failure I was here at my own home.” – Earl Stone

Brief Synopsis – An octogenarian begins to work for the drug cartel smuggling drugs from city to city.

My Take on it – This is a film that I was extremely interested in seeing ever since I saw the trailer back in October and unfortunately only had the chance to finally see now.

This film is done superbly by Clint Eastwood and he once agin is able to prove to the nay-sayers that he truly IS both a great actor AND Director; I would even venture to say one of THE very best.

Even as he closes in on the age of 90, he’s still churning out amazing films and this time, he saw the perfect opportunity to come out of his self imposed acting retirement to once again tackle such a complex and brilliant role.

They do an excellent job telling this story and despite the fact that on paper, the story sounds completely unbelievable, the way the film is shot, it comes across quite realistic and genuine the entire time.

The fact that parts of this story are based on true events also helps add to the way that the story is believed and it allows things to feel even more gripping and enjoyable all the more so.

Eastwood plays his character in such a way that he seems very spry in his step and it’s hard to believe that he is almost 90.

His character moves with grace and youthfulness in everything that he does along the way es[pecailly when he need sto deal with the various situation sthat he finds himself in.

The film ios deliberately paced very slowly and that works so well in making us believe that this story is being told in real time.

The supporting cast is also superb and Bradley Cooper, Dianne Wiest, Laurence Fishburne, Michael Pena and Andy Garcia all add so much to the story and make it all seem so much more down to Earth and believable.

Has such a great message about family and looking back on one’s life and realizing what you should have done differently.

Bottom Line – Amazing film that once again proves how great a director AND actor Eastwood is even as he nears his nineties. The story is told so well and despite the premise seeming quite unrealistic, it comes across as being so genuine.  Knowing that parts of the story are based on true events also helps keep things gripping and enjoyable throughout.  The supporting cast is also great with Cooper, Wiest, Fishburne, Pena and Garcia helping the story stay down to Earth and realistic.  It amazes me how spry Eastwood is able to play this character and it’s hard to believe that he truly was 88 when he filmed this movie because his character feels much younger due to his ability to deal with all of the situations that he gets himself into.  The deliberate slow pace of the story works really well in giving us the feeling of things happening in real time.  Great message about family and life in general. Can’t wait to see this again.  Highly Recommended!

MovieRob’s Favorite Trivia – The movie was inspired by the story of Leo Sharp, a World War II veteran in his 80s who became the world’s oldest and most prolific drug mule for the Sinaloa Cartel. (From IMDB)