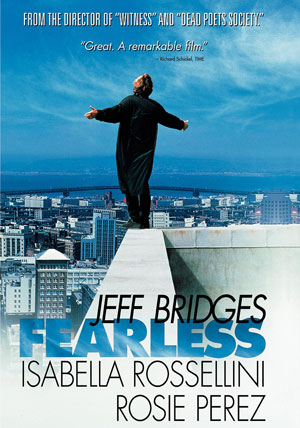 Brief Synopsis – After being miraculously saved in a plane crash, a man begins to change the ways of his life.

My Take on it – This is a film that I first saw over a decade ago and didn’t remember much about it.

The premise is an intriguing one that works on numerous levels because it allows us to see how various victims of a tragedy see things from different perspectives.

Jeff Bridges is great in the lead and finds a way to make us believe that his character has chosen to make some radical changes to his life following this near death experience.

Rosie Perez is the stand out among the whole cast as a young mother who survived the same crash and is wrought with guilt over it.

She deservingly was nominated for an Oscar for Best Supporting Actress for her performance in this film since it’s very powerful and realistic how her character acts throughout.

Peter Weir does a great job directing this film in a very plausible fashion from start to finish.

There are some pretty big gaps in the plot which they fail to properly explain which is quite a shame since had the developed those missing pieces of information, this could have been an even more powerful story.

Bottom Line – Very intriguing premise that works on numerous levels since it allows us to see into the various minds of different kinds of victims of the same tragedy. Bridges is great in the lead and truly makes us believe that his character has chosen to make radical changes to his way of life due to this near death experience. Perez stands out as a young mother who was also saved in the same accident. She deservingly was nominated for a Best Supporting Actress Oscar for this role which is quite powerful and realistic feeling. Weir does a great job directing this film in a way that things that happen all seem plausible as things move along.  The story has a few huge gaps in the plot line which are never fully explained which is a shame since having filled those gaps, this might have been even more powerful.  Recommended!

MovieRob’s Favorite Trivia – The airplane crash site was recreated in a field in Northern California and was exactly modeled on a crash that occurred outside Sioux City in Iowa in 1989. The “accident” was reported by several flights flying over the scene. The field was first planted with 85 acres of corn which was then bulldozed to recreate the gouge that a crashing plane would have made. The adjoining cotton field was also purchased to make the crash appear bigger. 140 extras were employed for the scene along with 40 members of the Kern County and Bakersfield Fire Department. One of the town’s main roads was closed for a week, and the local electricity company was persuaded to knock down several pylons and snarl up half a mile of electric cable to create a scene of almost total devastation. The crash site took a total of 10 days to prepare, and included throwing 600 suitcases and their contents (all items purchased from local thrift stores) liberally around the site. In total, the recreation cost $2 million.  (From IMDB)