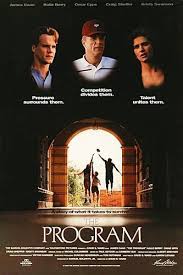 “Let’s open up a can of kick ass and kill ’em all, let the paramedics sort ’em out. ” – Alvin Mack

Brief Synopsis –  Various football players at a prestigious university must deal with the pressures of playing the sport in an academic environment with each finding different ways to cope with the stress.

My Take on it – This is a film that I recall hearing about when it came out but since I’m not the biggest fan of football (sorry J-Dub and Quiggy), I didn’t have much interest in seeing what it was all about.

The premise is intriguing because they want to show how the pressures of athletics can affect different students in very different ways; some good, some bad.

Unfortunately, they fail to make any of the story lines impactful enough because each of the character’s segments all feel too short when looking at them from an individual perspective.

Nothing feels very original or unique and they fall into the trap of stereotyping all of the characters too much.

The cast is this movie is pretty good, but the majority of them aren’t utilized enough and feel somewhat wasted here.

This is especially true of James Caan in the lead role because despite his character being the one every one else revolves around, he doesn’t have a strong enough presence on screen here.

The football scenes are done well and are a bit exciting to watch, but overall they too fail to add anything new or unique to the genre.

This is quite a shame since this s a movie that has so much more potential than is realized.

Bottom Line – Interesting premise that takes a bunch of intriguing ideas and tries to blend them together. Unfortunately they fail in keeping things feeling original enough and instead deal too much in stereotypes.  The cast is good, but most feel very watsed especially Caan in the lead.  The football scenes are enjoyable, but fail to add anything to the genre that hasn’t been done before which is a real shame since the potential is high here.

MovieRob’s Favorite Trivia – The original release of the film contained a scene where several ESU players lay on the yellow dividing line of a busy local road as a test of their courage. When two young men were killed, and several others injured, by imitating the stunt, Buena Vista excised the scene from the film. No post-theatrical versions of the movie feature the sequence, leading many to speculate that the studio destroyed the actual camera negatives of the scene. However, the scene can be found on YouTube. (From IMDB)