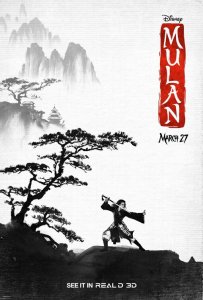 “Your chi is strong Mulan, but chi is for warriors, not daughters.” – Zhou

Brief Synopsis – A young woman disguises herself as a a man in order to take the place of her father when the Kingdom declares required conscription from each family.

My Take on it – This film is one that many people (myself included) have been looking forward to for quite some time.

This is a live action remake of the Disney animated musical from 1998.

The idea to make this story a mire serious one works well especially given the fact that they no longer have any music or funny animated characters to keep things fun.

This film fails because they never take the time to develop any of thecharacters besides the lead and this hurts things too much.

The soldiers fighting along with Mulan all feel so stereotypical and none of them stand out among the rest because they don’t have their own developed personality.

The main villain seem too much like a caricature and isn’t menacing or scary at all which also drags things down.

The film does have amazing cinematography and they are able to transport us to a much more natural place and time that looks superb.

The one aspect that this film is able to top the original version is the music.

The score is great, but the song played over the credits, Loyal, Brave and True is really able to capture the feel of this story.

Unfortunately, this film, despite its difference from the original animated movie just isn’t unique or powerful enough.

Bottom Line – Intriguing story that works quite well as a serious story instead of the comedy-musical that this story is based on. The characters unfortunately aren’t developed well enough besides the lead and that hurts things too much. None of the other soldiers has unique personalities and the villain is also too much like a caricature.  The cinematography is exquisite to watch here and they are able to capture the natural look of that time and place. The avalanche scene is really enjoyable to watch. The song over the credits is great.  Unfortunately, this film isn’t able to add enough uniqueness to this story.

MovieRob’s Favorite Trivia – Mushu does not appear in the live action remake. Disney made the choice to ensure that the live-action remake stayed true to Chinese culture and traditions. Instead, Disney included a phoenix in the film, which is a sign of peace and prosperity in Chinese culture. (From IMDB)