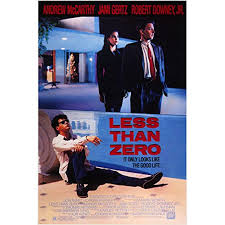 “This is not recess. Everyone is accountable.” – Rip

Brief Synopsis – A University student returns to his home town during Christmas break and must help his two best friends get out from the deteriorating lifestyle filled with drugs.

My Take on it – This is a film that I recall seeing on cable as a kid, yet didn’t remember anything about it besides the cast.

The story is a total mess and fails to make much sense as things unfold.

I am quite curious to try and recall what I thought of this as a teen, since as an adult, it was a bit too existential for my taste.

This is based on a novel which probably is able to make more sense of things due to the ability to add in a lot more exposition to things.

The film has a great cast led by Andrew McCarthy, Robert Downey Jr, Jamie Gertz and James Spader, but none of them are given enough to do here.

They would all go on to have promising careers, but their roles in this film are far from being among their best.

The story itself is paced really slowly and fails to be fluid in all that happens which is a shame because it makes things that much harder to find interesting.

Bottom Line – Strange film that doesn’t make enough sense. It is based on a novel that is probably able to explain much more abut what is going on in an expository fashion. The cast is superb, yet the four leads all feel watched here. McCarthy, Downey, Gertz and Spader would all go on to do much more in their careers and this is far from being a highlight for any of them. The story isn’t very fluid and it moves at a really slow pace which doesn’t help to make it more interesting to watch.

MovieRob’s Favorite Trivia – Robert Downey Jr. plays a drug addict in the film. This proved prophetic, as he suffered drug and alcohol addiction in later life. He recalled: “Until that movie, I took my drugs after work and on the weekends. That changed on Less Than Zero (1987), the role was like the ghost of Christmas future. The character was an exaggeration of myself. Then things changed and, in some ways, I became an exaggeration of the character”. (From IMDB)