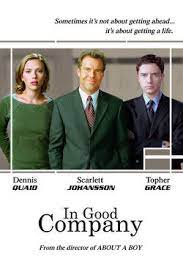 “I gotta get home for dinner. My wife is slowly poisoning me to death and she gets very angry if I’m late.” – Morty

Brief Synopsis – A veteran salesman gets a new boss who is 25 years his junior but things get even crazier when he begins to date his college student daughter.

My Take on it – Very intriguing idea that still works even after nearly two decades.

The idea to show the way that the business word has changed due to conglomerates and technology is done really well here since it allows for the viewer to get a real understanding of the absurdity of it all.

The characters are developed well enough for us to understand all of their motives and this helps keep the story engaging and entertaining the entire time.

The film is mostly set on a dramatic speed, but the way that they inject bits of comedy into things along the way helps keep the story from getting too heavy as things move along.

MovieRob’s Favorite Trivia – The studio wanted someone from the cast of That ’70s Show (1998) for the role of Carter and had originally given it to Ashton Kutcher. Kutcher dropped out due to creative differences, and Topher Grace auditioned and got the part. Grace had auditioned four times for the role, and had to convince producer Paul Weitz that he was right for the role, by highlighting his raising by his father, a businessman with sharp negotiation skills. (From IMDB)