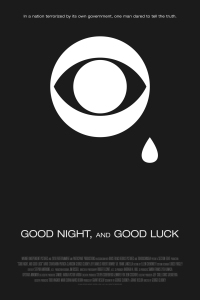 “We have currently a built-in allergy to unpleasant or disturbing information. Our mass media reflect this. But unless we get up off our fat surpluses and recognize that television in the main is being used to distract, delude, amuse, and insulate us, then television and those who finance it, those who look at it, and those who work at it, may see a totally different picture too late. ” – Edward R. Murrow

Brief Synopsis – As the House UnAmerican Activities Committee  and Joe McCarthy continue their witch hunt on communism in the media, journalist Edward R. Murrow and his crew decide to take him on.

My Take on it – Amazing film that is able to show the power of the media in helping change the world.

This film chronicles the onscreen battle between Joe McCarthy and Edward R. Murrow and it is done so well here.

David Strathairn is superb in the lead role and remains captivating in all that he says and does throughout especially given the fact that he plays this character in a very subtle, calm and realistic style.

The choice to film this movie in black and white helps give the viewer the feel of the 50’s and that allows them to show how it all plays out so profoundly throughout.

Clooney also directed this film as well as wrote it.

He was deservingly nominated for an Oscar for both directing and for is writing of the screenplay.

In addition, the movie was also nominated for Best Picture, Actor (Strathairn), Cinematography and Art Direction, yet didn’t manage to win any awards.

The story is quite timeless in its message and is still as relevant to today’s world as it was to the 1950’s.

The dialogue is crisp and witty and manages to stay engaging throughout.

MovieRob’s Favorite Trivia – Precisely every 23 minutes (the standard running time of television shows from the 1950s), the film is punctuated by a jazz song performed by Dianne Reeves. (From IMDB)