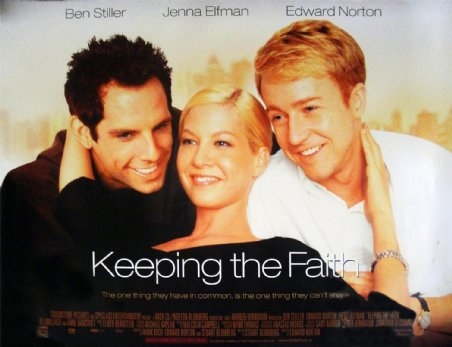 “Tuesday’s not good for me, I gotta mourn with the Schwarz’s” – Rabbi Jake Schram

Brief Synopsis – Two best friends; a rabbi and a priest have there lives changed when a friend from their past re-enters their lives.

My Take on it – I have always enjoyed this movie.  It has a lot going for it; clever idea of having a rabbi and priest as best friends, great cast (Ed Norton, Ben Stiller and Jenna Elfman, lots of funny lines, great first time director (Ed Norton – who has never directed anything else since) and an actual message in a romantic comedy.

I think Stuart Blumberg wrote a great script, showed it to his friend Ed Norton and somehow managed to get 2 additional top stars to star in it and even convince Norton to direct.

The script constantly plays off the old joke of a rabbi and a priest, but the joke never gets old here since both characters are modern and “hip”.

The message put forth in this movie is all about faith; how one gets it; how one keeps it; and what one does when he loses it.

It isn’t a movie about religion per se, but actually how people deal with faith in god, faith in themselves and in faith in the people around them.

Also has a great soundtrack!