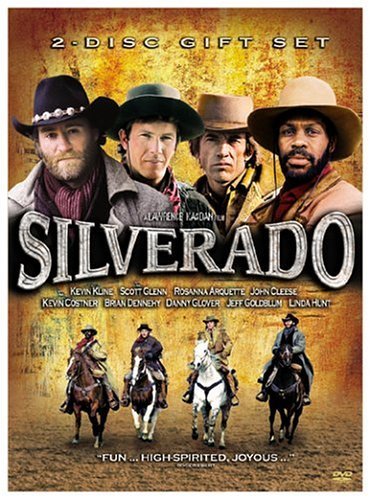 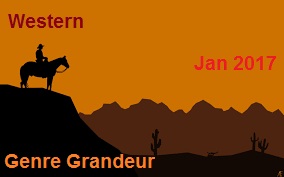 For this month’s next review for Genre Grandeur – Westerns, here’s a review of Silverado (1985) by me

Thanks again to Catherine of Thoughts All Sorts for choosing this month’s genre.

Next month’s Genre has been chosen by Sean of SeanMunger.com  We will be reviewing our favorite Nautical Films.

“Loosely defined as anything taking place in, on or under the sea or heavily involving the sea.

Representative examples might include stuff like Master and Commander: The Far Side of the World, Mutiny on the Bounty, The Hunt For Red October, The Enemy Below, Damn the Defiant!, Cast Away, that sort of thing.”

Please get me your submissions by the 25th of Feb by sending them to nauticalsean@movierob.net

Try to think out of the box! Great choice Sean! 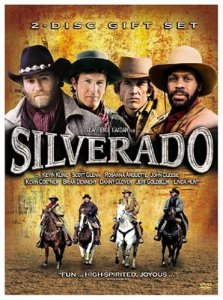 “The world is what you make of it, friend. If it doesn’t fit, you make alterations. ” – Stella

Brief Synopsis – Four very different cowboys band together to stop injustice in a small community in the old west.

My Take on it – I have always loved Lawrence Kasdan’s work and this is one of his best films IMHO.

Kasdan has always been able to create characters and situations that seem so far removed from one another and then finds a way to bring them together in ways we could never have envisioned.

Kasdan is best known for his film The Big Chill (1983), but he has been able to create some other films that take stories of diverse characters and bring them together.  He does so in this film and also in Grand Canyon (1991), another favorite of mine.

The dialogue is excellent and the characters all seem so real and genuine.

At the time when this film was made, Westerns were at an all-time low and I believe that the success of this film helped bring on a resurgence of the genre.

This film’s story is full of adventure, humor and also serious scenes and all are merged together so well.

It’s actually quite unbelievable how many known actors appeared in this film.

This film’s story is extremely fun to watch and is engaging the whole way through.

The musical score is so addictive here and Bruce Broughton did a wonderful job composing it.

Bottom Line – Amazing cast helps make this film so much fun. Kasdan knows how to create diverse characters and situations and somehow bring them all together. At a time when Westerns weren’t necessarily in the minds of everyone, this film showed a bright spot where they could have a  story that isn’t too dark, but still adventurous, fun and engaging the whole way through.  Unbelievable how many known actors appear in this film.  Excellent musical score punctuates it all! Highly Recommended!

MovieRob’s Favorite Trivia – John Cleese’s first line, “What’s all this then?”, is a Monty Python in-joke, as that line was often uttered by policemen upon entering the scene of a crime on Monty Python’s Flying Circus (1969). (From IMDB)