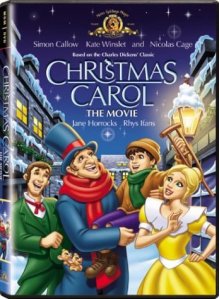 “Cratchit, that slovenly, good for nothing… Even a tiny mouse is more tidy! ” – Scrooge

Brief Synopsis – An animated version of the famed Dicken’s tale about a miser who is visited by three ghosts who try to convince him to change his miserly ways before it’s too late.

My Take on it – I came across this film by accident after hearing the film’s main song which inspired me to want to also watch the film.

Most of us have seen numerous versions of this story in so many incarnations over the years and the main question one can ask each and every time is what makes this version different from the others and stand out?

The animation is average here and doesn’t come anywhere close to the Disney , Dreamworks or Pixar standards, but it passes for interestingly done.

The spin on the story by making it seem like a love story works in its favor, but just isn’t presented well enough here to make us care enough about the characters.

and what’s with those strange mice who think they are part of this story? Go back to Cinderella land pls.

The one glimmer of hope here is actually the music because the score is done quite well and the main theme song sung by Kate Winslet is actually amazing to watch and listen to.

If for some reason, you’ve never heard the song What If?, check it out here.

There are lots of better versions of this story,  I suggest you watch them before you seek this one out.

Bottom Line – A pretty mediocre version of the classic Dicken’s tale.  The way they focus on the love story more was a good idea, but just done extremely poorly here.  The one bright spot is the music used throughout especially the amazing song sung by Kate Winslet – What If.  There are lots of better versions of this tale out there…

MovieRob’s Favorite Trivia – An accompanying music video, which was directed by Paul Donnellon and produced by Chris Horton, shows Winslet walking around an old Victorian house, along with clips from the film. At Winslet’s request, the proceeds from the single were given to the National Society for the Prevention of Cruelty to Children and Sargent Cancer Care for Children. (From Wikipedia)