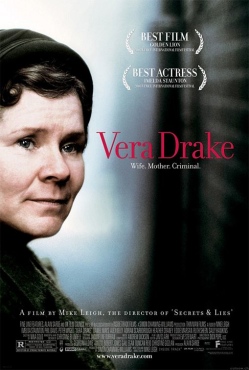 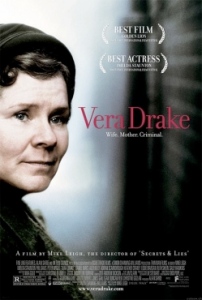 “That’s not what I do dear. That’s what you call it. But they need help. Who else they got to turn to? No one. I help them out.” – Vera

Brief Synopsis – In the 1950’s in London a simple housewife works to help young women who get “into trouble” by performing abortions despite the fact that it is against the law.

My Take on it – This is a film that I recall hearing about not long after it came out, yet never had the opportunity to see what it was all about.

I have enjoyed Mike Leigh’s movies on a whole and this film is told in such a way that we get a clear picture as to what is going on and why.

Imelda Staunton does a wonderful job in the lead and the fact that her character is soft spoken yet stick to her beliefs helps make her screen presence even stronger the whole time.

She was very deserving of the numerous nominations that she received for this role including Best Actress at the Oscars and Globes that year.

The story tries not to be judgemental and allows the viewer to try and decide for themselves what they should believe about the issues presented here.

Bottom Line – Interesting story that works quite well. Staunton deserving was nominated for quite a few awards for this role including Best Actress at the Oscars and Globes. The story gives us an interesting perspective on the way abortions were handled in the 1950’s in England even though it was against the law. The story moves at an interesting pace and allows us to slowly digest all that is happening while also allowing us to decide what we believe about everything going on. Leigh does a wonderful job directed and definitely deserved his Oscar nomination for Best Director for this film. Recommended!