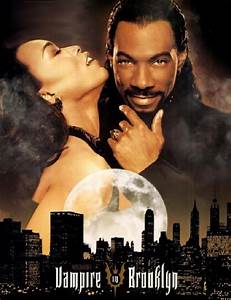 “Evil is good and ass is good, and if you find you a piece of evil ass, WOO! ” – Maximillian

Brief Synopsis – A vampire travels to modern day Brooklyn in order to find his mate; a half vampire half human woman who will help his species endure.

My Take on it – This is another Eddie Murphy film that I had never seen before but was intrigued to see what it was all about.

When this film came out, Murphy was pretty much already past his prime and this film shows that all too perfectly.

This is a terrible film that fails to work at all which is a shame.

The choice to try and make this a horror comedy is the biggest problem.

The film tries too hard to be funny and in most of those instances falls short of even a chuckle because the jokes just don’t work well enough.

The horror aspects of this film aren’t thrilling or scary and instead feel like a very lame attempt to do something better because it all comes across in a very silly manner.

The story has some potential yet is far too boring for its own good especially since it takes things in some very strange directions that actually make so little sense.

Murphy one again tried to use his trademark acting skills to play multiple characters but unlike in his Nutty Professor and Coming to America (1989) films, these characters just don’t work and it’s quite hard to care about any of them enough to actually find them enjoyable to watch.

Bottom Line – Terrible film that doesn’t work at all. Murphy really misses things here because he chose to make this a horror comedy instead of one or the other.  The comedic aspects of the film fall short and much of the humor that made him a star falls flat. The horror aspects are too silly to take in a serious manner which also hurts things. The story is quite boring and things move along in some very strange directions.

MovieRob’s Favorite Trivia – On The Directors (1997), Wes Craven suggested that Eddie Murphy ignored his requests to play the character vulnerable, and felt compelled to showcase his comedic talents. (From IMDB)