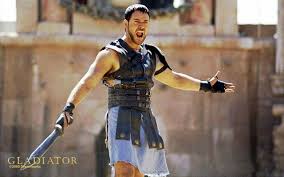 “Nothing happens to anyone that he is not fitted by nature to bear.” – Maximus

Brief Synopsis – A former Roman General must fight as a gladiator in order to try and avenge the murder of his wife and son at the hands of the Emperor’s corrupt son.

My Take on it – I saw this in the theater and really had no clue that it would be up for so many awards (and win them too). It was enjoyable and entertaining.

The story is definitely done in an epic style and it gives you a sense that this is really how the world of gladiators and Rome really worked and that’s the thing that really sucks people in.  Most people want to see a movie (even a historical one) that you can believe is based on reality.  This movie does it so well, and if it wasn’t for Ang Lee’s direction of Crouching Tiger, Hidden Dragon (2000) coming out during the same year, Ridley Scott would have won numerous Directorial awards.

This movie found a way of seamlessly merging the feel of an epic historical movie and modern technology.  Most of the Colosseum scenes are done with CGI making it more of a majestic arena.

The music by Hans Zimmer is paced so well that it works together with the action, ma king the scenes even more intense.

Winner of 5 of 12 Oscars (in a year that 3 movies split the award for most wins. Traffic (2000), Crouching Tiger, Hidden Dragon (2000) and this movie each had 4 wins before Best Picture was announced)

It won Best Picture, Actor (Russell Crowe in a role inferior to the one he had in The Insider (1999) the previous year), Costumes, Visual Effects and Sound.

It’s interesting to note that Pheonix and his brother River, are the only set of brothers to EVER be both nominated for acting awards in Oscar history.